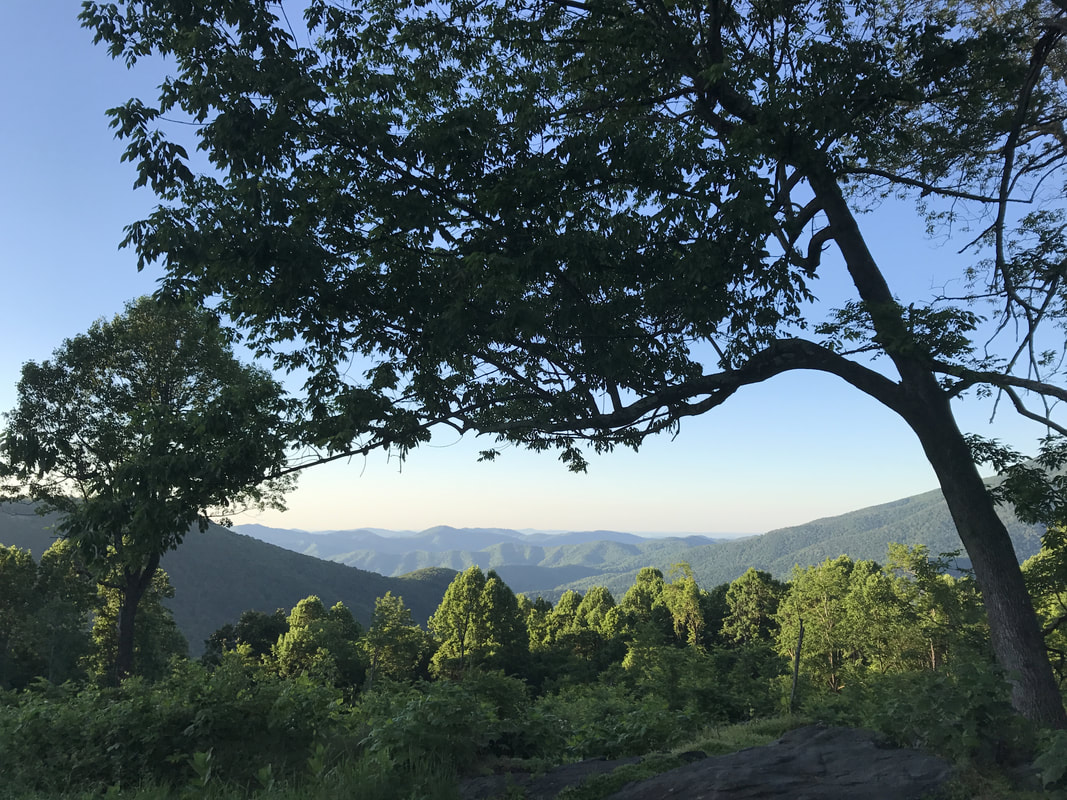 Mere minutes after we clamber down from Spy Rock, a cloud of fog rolls in.

Wow, we lucked out on sunrise, I think.

I get a perfectly obscured view atop The Priest. Hiking down quickly, I cross a bridge and continue up the Three Ridges. Last year, I’d taken the the Mau-Har trail around the ridges: This year, this section is my last new section of the Virginia AT. I go over the first ridge. The second. The third. The sun sinks low in the sky, grazing the edges of the treetops.

By the time I roll into camp and set up my tent, I need my headlamp to cook. Just two other tents sit nearby, in stark contrast to my memory of Maupin Fields Shelter from the previous year: I recall crowds of hikers playing cards around the shelter. That night, I dream of the trail-famous Ming’s buffet in Waynesboro. So close,  I tell myself. Just a day or two away.

Drunk on the promise of food, I somehow hike 21 miles into Rockfish Gap. I join Carter and Kelly at a roadside popcorn stand, loosen my boots, and put my feet up between two benches. Half an hour later, we stand at the edge of the road, thumbs out, attempting to hitch a ride into town.

Car after car passes by, until finally, a white truck pulls up. A piece of plywood lies across its back, sticking out its open tailgate. We pile in for a short ride into downtown Waynesboro.

When Silas and Jenny hitch into town an hour later, we all meet for dinner at the Ming Garden Buffet. The staff, well acquainted with thru-hikers (and the thru-hiker stench), seat us in our own walled-off compartment away from regular customers.

Who knew that a simple Chinese buffet could be so delicious? I pile a plate high with broccoli and salmon - despite eating tuna pouches every day, I still love fish - and head straight for the fresh fruits and vegetables. How I have missed these simple pleasures!

As we leave, we run into Silk smoking a cigarette at the back of the buffet. She asks us about the Waynesboro Hiker Fest. It’s listed in the guidebook as a free meal at Heritage on Main, followed by a free movie. Tomorrow. It sounds fun, though not a single poster in town advertises the event.

Still, we take a zero the next day and head down to Heritage on Main. A confused and slightly flustered staff greets us.

“Uh – we don’t know anything about that,” they say to the crowd of about ten hikers gathered in their lobby. They seat us in the back room. “It’s not unusual for something like that to be arranged, but we weren’t informed of anything like that.”

“The staff doesn’t seem to know about it.”

The waiters leave to speak with their manager. Just as we’re debating whether to leave, a thickset man in a red shirt strolls in.

“Hiker trash!” he shouts in a boisterous voice.

A waiter scrambles to pull up a chair for the newcomer; another scurries over with a tall glass of sweetened iced tea. They are beaming. “Good news!” they say.

Yellow Truck offers us all a free meal - anything on the menu, but “no alcohol” - and a movie afterwards.

"I was born in New York City, but you can't tell them that. People down here would never elect you if they found out you were from New York. So, I say I've been here since I was four... "If you see a pothole, you can do something about it...I saw that things could be done better. I like city politics, a little of state politics, but not national politics." ⁃ Yellow Truck, Waynesboro trail angel

After lunch, my trail family and I return to our hotel room. We are about to enter the Shanandoahs, where we will temporarily part ways. They plan to “aqua blaze” and canoe through the mountains. Being rather nervous about canoeing down a river and in no way inclined to pay for such an experience, I plan to take the AT through.