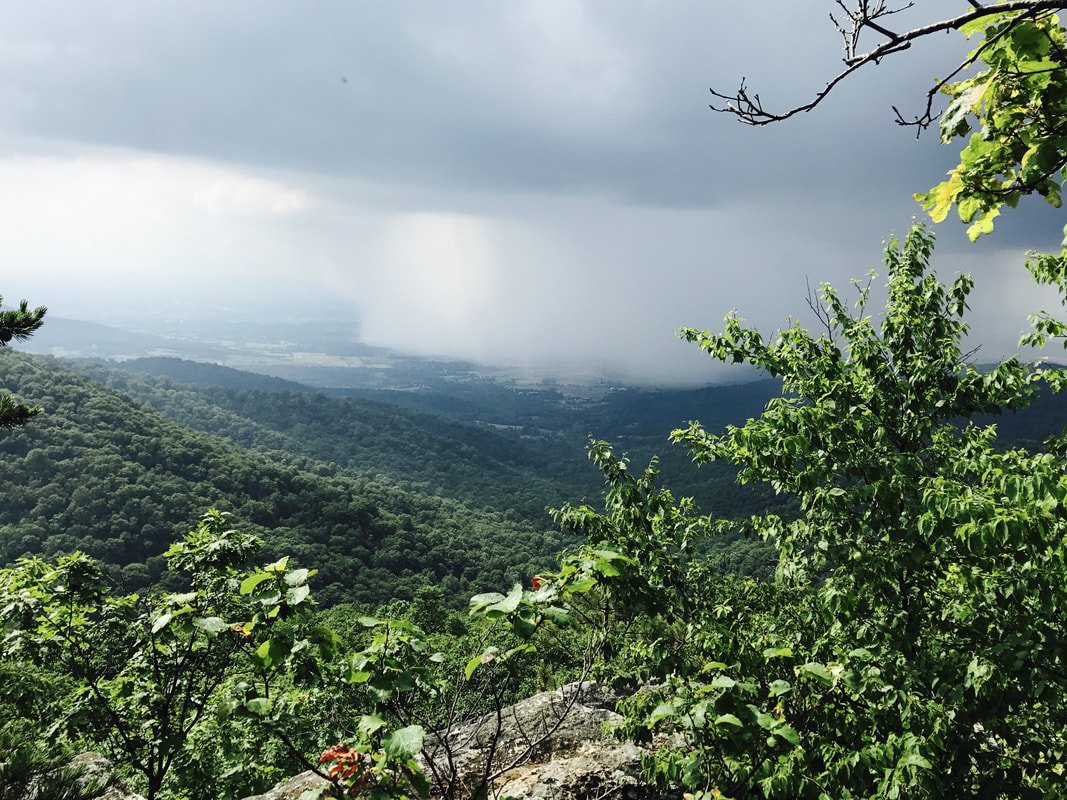 Every hotel in Waynesboro maintains a list of trail angels willing to shuttle hikers back to the trailhead at Rockfish Gap. After breakfast, I consult the list and randomly pick a name. A man picks up.

“How many hikers did you say you have?”

The man agrees to pick us up at 7:30 am, sharp. He drives up in a red car that looks so clean, I feel almost guilty for putting my dirt-covered pack in it. He says he’s part of the Waynesboro Economic Development Committee.

“If anyone’s treating you poorly, I want to hear about it,” he says as he drops us off at the trailhead.

The trail enters Shenandoah National Park shortly afterwards. After registering, I continue up to Little Calf Mountain, feeling a sense of déjà vu as I look back towards Waynesboro. I remember hiking these mountains last year, before the last frost turned to spring. The green forests look far different from the seas of brown in my memory.

As I hike, I meet Bigfoot, a man who thru-hiked in 2012. He wears glasses, and his rimmed hat covers gray hair pulled back into a ponytail. I join him for lunch.

"Everyone should be a waiter. It's a real different way of thinking...You represent a corporation. You make your customers' day better. You think on your feet." - Bigfoot, 2012 thru-hiker

He worked as a waiter, then a chemical engineer; now, he envisions building a community of tiny homes on 160 acres of Idaho.

I ask his opinion on how to become successful.

“Hard work, perseverance, and find some job that makes you feel good…A degree gets you in the door. You use your wits to make it.”

“How do you know if you’re going in the right direction?”

"I have a theory: You need to train your mind and your body to be successful." - Bigfoot

After lunch, Bigfoot sets up his tent as I pack up and leave.

A few hours later, I find a small clearing, pitch my tent, and turn in for the night.

The next afternoon, a mama bear suddenly pokes her head out from a patch of shrubs by the side of the trail. She is close - maybe 20 feet away - close enough that I can make out the tufts of black fur on her ears, the gleam of light in her eyes. Slowly, she swivels her head towards me. For a few suspended seconds, we stand there, frozen. Then, with regal indifference, she turns away and lumbers down the trail. One cub emerges from the shrubbery, then another, each bounding after her.

I slowly move one hand away from the bear spray in my side pocket. Fumble around my hip belt for my phone. Snap a photo of their receding forms.

For the next couple days, I continue to push for higher mileage. Each night, I clumsily force myself to complete my camp chores before crawling into my tent, jotting down a jumble of thoughts in my journal, and drifting to sleep. I pass the 900 mile marker, yet barely notice. I take no time to see the views; I shovel down each meal as if training for a speed eating contest. My feet ache, and I hobble around camp, my body not quite able to recover from each day’s exertions.

This is not how I want to hike, I realize, midway through my fourth day in the Shenandoahs. So, I slow down.

I stop by Big Meadows, one of many pit stops in a park dotted with camp stores, and sample the famous blackberry milkshake. It tastes rather plain, like vanilla ice cream mixed with blackberry flavoring. After finishing, I stop by the coin-operated campground showers to wash away several days of grime; for a brief moment, I feel like a normal person, rather than a wild backpacker roaming the woods.

Rain starts falling as I reach Rock Springs Shelter that afternoon. I squeeze onto the top bunk, above a group of hikers I’d seen eating lunch at Big Meadows. There are three girls, two boys, and an older gentleman; they alternate freely between speaking Pennsylvania Dutch and English. The girls wear full length plain blue dresses covered by white aprons, their hair neatly tied up beneath bonnets. The man’s face and beard bear a strong resemblance to Abraham Lincoln. He explains that he is hiking the Shenandoahs with his sons and daughter; they’d arranged for a driver to take them to and from the park.

The rain continues intermittently through the next two days, made more bearable by my frequent stops at additional camp stores: I grab breakfast at Skyland Resort and lunch at Elkwallow Wayside. During a lull in the rain, I take a detour to Stony Man Mountain to see the view.

Finally, I find myself a mere 14 miles from Front Royal, a town at the northern end of the Shenandoahs. I rush into town to snag a bunk at the Mountain Home Cabbin before the hostel fills up.

I spend the rest of the day in town, enjoying the company of other hikers, including one man from Slovenia - “the home of the infamous Melania Trump,” as he puts it - happy to be done with the Shenandoahs.