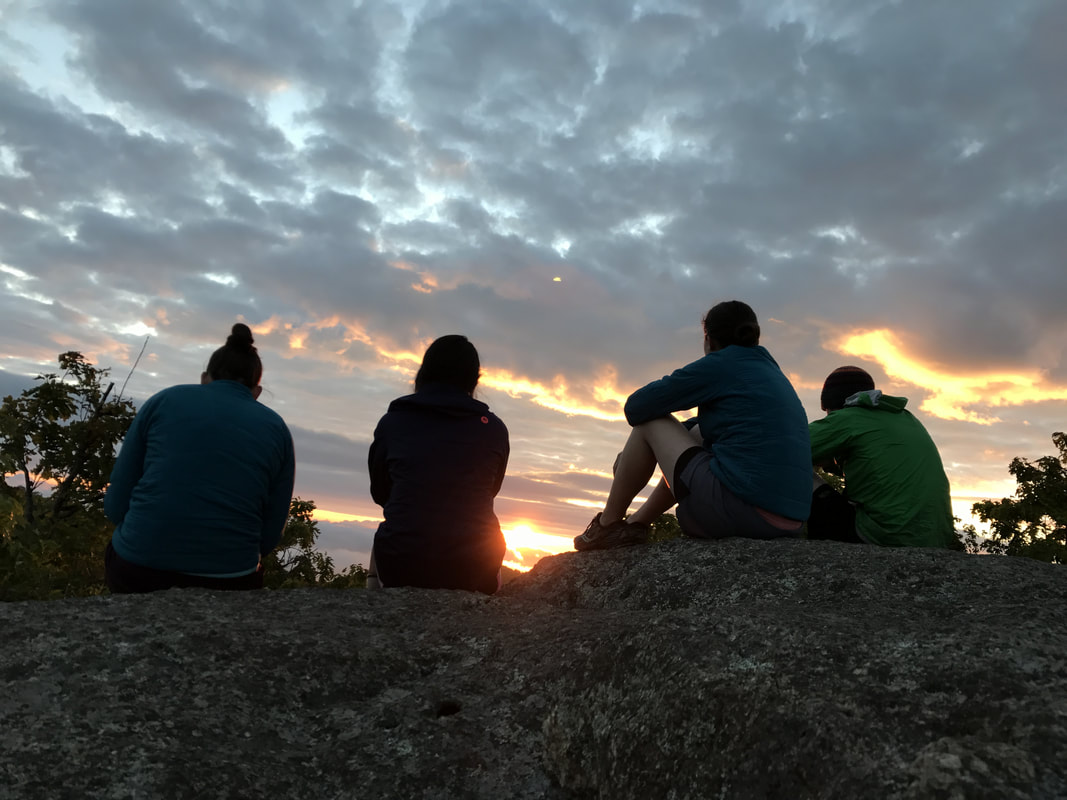 I linger at McAfee Knob, nestled against the rocky outcrop, for a few moments longer. A soft glow still emanates from the clouds just above the horizon when I turn to go, walking past several bands of thru-hikers up for the sunrise. The trail follows a curved ridge to Tinker Cliffs; I remember seeing the flicker of headlamps bobbing along the ridgeline last night.

I reach Tinker Cliffs a few hours later. Peering out from the cliff edge, I can just make out the faint outline of McAfee Knob jutting from the ridge across the valley below. I smile as I remember standing here, just over a year ago, watching the sunset.

11 miles later, the trail leaves the cover of the woods and exits onto a four-lane highway. A Howard Johnson and Super 8 Motel stand to my right, just down the road from a BP gas station: Daleville, VA.

For the next couple days, we putter about town, sampling the fast food joints, resupplying at the grocery store, and touring the local shops. We sleep three to a room: one for girls, one for boys. The second afternoon, Jenny brings in a bottle of wine, only to realize that no one has a wine opener. In the ensuing minutes, we try progressively more creative methods to pop the cork. Following YouTube instructions, Jenny stuffs the bottle into a hiking boot, heads outside, and slams it against the wall.

“I don’t necessarily want to stand downwind of that,” Carter remarks, edging to the side.

No luck. Finally, Tom grabs the bottle and begins pushing the cork inside. Success!

Later, Silas plays Lil Dicky’s ‘Pillow Talk,’ bobbing his head along to the music. Jenny soon joins in. Within minutes, both are waving their hands around as though dancing to ‘Walk like an Egyptian.’ Silas grabs a couple Q-tips and stuffs them into his ears. Tom walks in, stares for a good 10 seconds, and slowly backs out.

I join everyone for breakfast the morning of the third day, then hike 5 miles to the next shelter. Carter and Kali stay back waiting for packages to arrive; everyone else plans to hike out after lunch.

When I reach Fullhardt Knob Shelter, I find Tenacious and Nighthawk at the picnic table with a gentleman I don’t know. The first thing I notice is his ‘POLICE’ cap.

Nighthawk introduces him as her uncle, Truncle Ass Swagger.

‘Are you guys zeroing again?’ I text at them.

I can’t help but laugh.

At dawn, sun rays paint the shelter orange. I pack quickly, hoping to catch up to hikers I know. About 14 miles in, I find Silk, a blond-haired woman I met at Woods Hole Hostel, and Bananas, a male hiker, collecting water from a stream. Silk has launched into a detailed conversation on female hygiene issues on the trail; Bananas, looking increasingly uncomfortable, hastily excuses himself and leaves.

"I'm just so comfortable with myself. I say whatever I feel like to myself, so why should it be any different for anyone else?" ⁃ Silk, NOBO thru-hiker

As I fill up with water and sit to take a break, Tenacious joins us. I push on another 6 miles to Cove Mountain Shelter, and spend a fun evening playing Skip Bo with Tenacious, Nighthawk, and Truncle.

The next couple days pass fairly quickly. I head to Middle Creek Campground for an egg sandwich, and enjoy goofing around beneath the Guillotine, a boulder suspended between two cliff faces that straddle the trail. Later, I stay at the Stanimals Hostel in Glasgow and resupply.

"Money is a symbol of productivity. That's all - you can be poor and wealthy, or rich, and not happy." ⁃ Bob, owner of Stanimals Hostel

That’s when I notice a cluster of small holes peppering the balls of my feet.  Gross,  I think. The holes are not painful, but are slightly itchy. I slather some antibacterial cream on them and debate whether to nero the next day.

The pouring rain the next morning makes up my mind: I hike to the next shelter and set up my sleeping pad. A former thru-hiker sits there, as well. I ask him about Maine.

“You have to fight for every inch, but every inch is worth it,” he says.

He tells me he met the builder of the Roller Coaster, a relatively rocky section at the end of Virginia that incorporates many small hills. “I asked him, ‘Why did you make it so hard?’

I hike on as usual for the next two days, stopping at Spy Rock at the end of the second day. After waiting around for awhile, I reunite with my tramily!

We enjoy another sunrise.