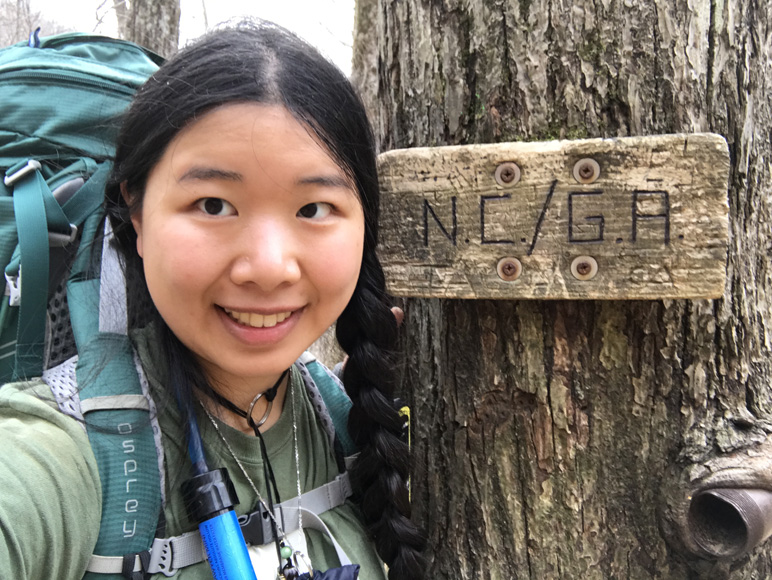 Don, Josh’s shuttle driver, drops by in the morning as we pack. His car is with the mechanic, but he offers to hook us up with more shuttlers.

“Dude,” he says, “some of those other drivers, man, they’ll charge you ridiculous prices, dude, for each additional person. Me, I charge the same price, dude. Doesn’t cost me any more, man. I’m still going to the same place.”

We end up dialing several numbers - no response - before trying our luck at hitchhiking out of town. After walking to the local coffee shop, we join a hiker named Athena at the curb, and stick out our thumbs. Cars race by.

After a couple more minutes, Athena removes her hat and shakes out her hair.

“I’m about to show some leg,” Athena jokes.

A pickup truck pulls over, and in short order, we find ourselves hitching a ride back to Neel Gap in the truck bed.

The day passes in a blur of trail magic, meeting other hikers, gathering firewood, and telling stories around the campfire.

I’m legally blind, and it’s getting worse. I recognize postures and gaits, but I wouldn’t recognize your face. I’d like to do it while I still can. I’d like to inspire people to get out there. Doesn’t matter if you’re overweight or have health problems. You shouldn’t hide away.”

“Being the youngest of five has advantages and disadvantages. For the longest time, I thought rhinos weren’t real. My brothers convinced me that rhinos were like unicorns. They were like, ‘You know all those pictures in your textbooks? They’re lying to you. That’s what the government wants you to believe.’ I was like, ‘Woah.’ So when I saw a rhino in a zoo for the first time - this was, like, the end of high school - it was as if I had seen a unicorn in real life.”

The mild weather does not last. Morning brings a steady cold rain mixed with occasional thunder. Many hikers, burrowed into their sleeping bags, wait out the rain in crowded shelters. Some head into the nearby town of Helen. Pushing on, I meet a former investment banker: Little Prince.

“Got any good stories?” he asks me. “I like getting people’s stories.”

I’d rather do a ‘bad’ job with good people than my dream job with bad people.”

Somehow, the last 5 miles of the hike seem easier with company. I begin to think of hopping into town myself. The Top of Georgia Hostel is but a day’s walk away.

Small pellets of hail pelt me across the face as I prepare breakfast the next morning. Great –, I think, suddenly glad I reserved a bunk the night before.

It’s a relief to reach the hostel and get some reprieve from the mix of hail, sleet, and snow outside. First order of business: hot chocolate. Then, a shower. A few folks from the Hiker Hostel also stay the night. We head to the local buffet, and play a round of scrabble before bed.

5:38 am. Time to sneak in one last shower before the other hikers wake: some 20+ hikers share the same bathroom. Sir-Packs-A-Lot delivers his daily spiel during the complementary all-you-can-eat-cereal breakfast. “25% of people quit by the time they get here,” he says, highlighting the Hostel on a map of the Appalachian Trail painted on the wall. “50% quit by Hot Springs.”

Hot Springs is north of here, in North Carolina.

“The seniors have got an advantage because they know what it’s like to have a long term commitment - to have a job with an asshole of a boss for 20 years, to be in a marriage that is sometimes difficult - but they need the young kids, too, to inspire them: to remind them of what they were like at 22.

“One of the most beautiful things I’ve seen is when the young hikers sit there and wait for the older dude - they don’t want to split up their family. Offer them a ride, and they say, ‘No thanks, we’re good. We’re waiting on someone.’”

⁃ Sir-Packs-A-Lot, owner of the Top of Georgia Hostel

I cross the GA/NC border on my 9th day. Though the day is warm, a sprinkling of snow still covers the ground in some areas. As I hike, two dayhikers pass by in the opposite direction.

“You’ve got some trail magic coming up in 6 miles. At Deep Gap!” they shout.

I thank them and hurry on. A couple miles from Deep Gap, I run into a backpacker I met on the train to Georgia. I rack my mind for his name. Something like…Doug…Fart?

“Can I just call you…Doug?” I ask. I’m not too keen on accidentally calling someone ‘Fart.’

“Duck Fart? How did you get that?”

“It’s a drink. Back when the trail started, no one knew what it was. I had to show them how to make it. Next time I went back, I told them I was the one who showed them how to make the drink, and they said, ‘Oh - Duck Fart!’”

“Last time I came down to Deep Gap was with a friend. We were planning on doing trail magic, but these other guys were there. So, we set up camp and sat around the campfire.

“I had a headache, and I never get sick, so I said to him, ‘I have a headache. I’d appreciate it if you’d watch over me.’

“That was the last thing I remember saying. When I woke up, I was in the hospital.

“‘I think they helicoptered you in.’

“‘Well… my first helicopter ride, and I don’t remember a thing! How long’ve I been here?’

“‘3 weeks. People don’t usually come back from that.’

“I had had a brain hemorrhage. Nothing was wrong with me then ‘cept double vision. Doctor said he could let me out with an eye patch. He asked what I’d do once I got out.

“I said, ‘I’ll hitch a ride back to Franklin to get my car.’

“I call that day the day Duck Fart had a brain fart.”

That afternoon, I indulge in trail magic from a couple of former thru-hikers: Red Truck and Green Truck. Hotdogs, barbecue pork, cantaloupe, peach crumble - what more could a hiker ask for?

My pack feels light the next morning: I am just a day from my next resupply location in Franklin, NC, and I have eaten almost all the food in my food bag. Long distance hikers must plan out resupply options along their treks, either by mailing food to post offices and hotels, or visiting gas stations and grocery stores in town. After heading to Betty Creek, I camp with Good Times, Heinz, and Diesel.

“Good times - I always look like I’m having a good time.”