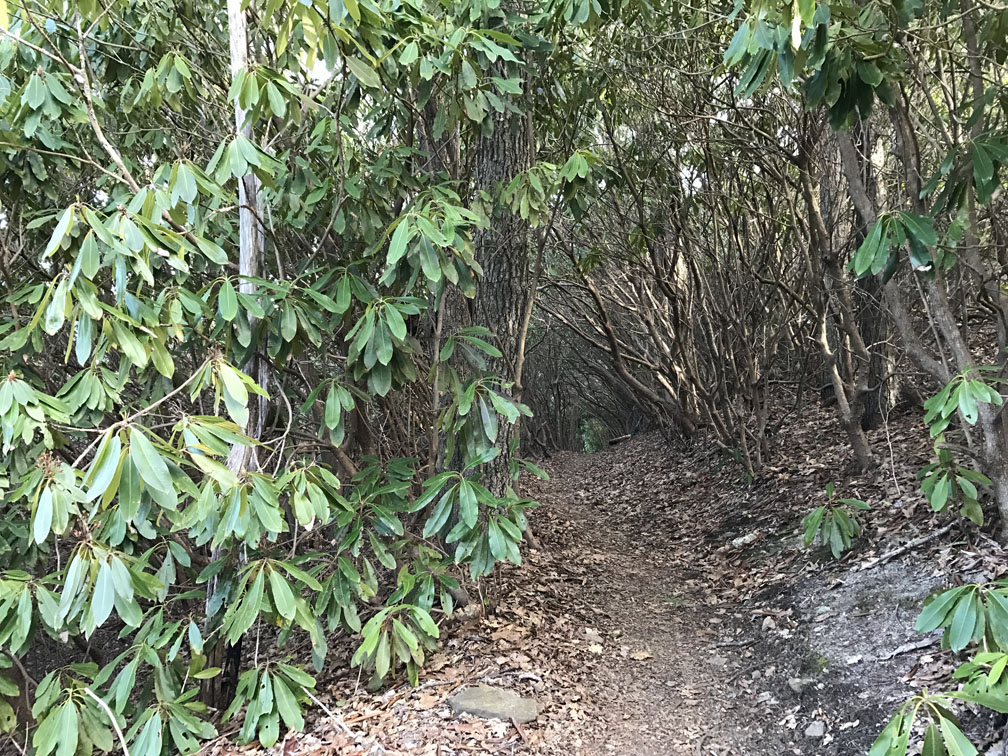 A fire tower lies directly ahead atop Albert Mountain. As I climb up a winding passage lined with rhododendron, I catch a glimpse of dawn through a break in the foliage. I can’t help but pause, taking in the pastel colors splashed across the sky.

Climbing the fire tower will place me a full mile above sea level. Slender metal beams support the tower, offering wide open views to the valleys below. Halfway up, I glance down and feel my legs start shaking. That should be high enough to put me a mile above sea level, I think, hurrying back down. I put on my pack and hike on for awhile before I think, What are you doing?! This is your only chance to climb that tower. You may not come this way again. Go back!

I grit my teeth, walk back, pull on gloves, grab the railings, and scramble up the tower as quickly as I can. This time, I make it all the way.

By early afternoon, I reach Winding Stair Gap, closely followed by several other hikers, including Good Times, Heinz, and Diesel. Solace, a shuttler from the Franklin Budget Inn, arrives shortly after I call for a ride. He drives an old white van with the back seats pulled down and a Bert doll tied to the center console.

“The most I’ve fit in here is 20 people and a dog,” Solace reassures us.

Four of us pile into the front seats, while the rest squeeze onto the back seats with the packs.

“Have you thru-hiked?” someone asks Solace.

“I haven’t - but Bert has,” Solace says, keeping a straight face as he nods at Bert.

Fifteen miles later, we pull into Franklin. The trail town is abuzz with activity. Baltimore Jack’s Hostel sits across the street from Haven’s Budget Inn, and a buffet, outfitter, and pub lie just down the road. At least eight hikers sit sprawled outside the first room of the inn. Good Times heads over to join them. I spot Missionary and Left Foot nearby; they wave hello as I retrieve my mail drop. As I sit down next to them, one of the hikers - Chicken - says, “I’ve been wanting to get out of this town for days, but I kept getting hammered. This is my fifth beer-o!”

Beer-o: A play on ‘zero day,’ a day spent hiking 0 miles, often in town. Woah, I think. Another hiker, Rowdy, has a dog with her. The dog sniffs curiously at my mail drop.

Missionary, Good Times, and I end up rooming together in the Baltimore Jack Hostel across the street. For dinner, Missionary and I head to the Asian King buffet with three other hikers: Brian, a preacher from California, and his two sons, Nate and Caleb.

“So why are you hiking?” Brian asks me.

“Unfinished business,” I reply. “I did a long section hike last year. I was drawn by the challenge of it, and the chance for personal growth. Met a bunch of thru-hikers. This year, I’d like to follow through.”

“Unfinished business and follow through,” Brian muses. “Both of those would make good trail names.”

That night, Missionary and I find ourselves wondering where our Neel Gap neighbors ended up.

“I think they’re behind us – they all got off at Unicoi,” I say.

“Someone said Matt was here yesterday,” Missionary replies. He pauses. “Matt’s really wise. He says really deep things. Like, the other day, he said, ‘Hating someone is like drinking poison and waiting for the other guy to die.’”

“There are some who say man is the sum of his adventures.”

Good Times walks in after calling his partner. Dropping into his bunk, he announces his plans to zero the next day and let his shin splints heal. “There are some people ahead of me,” he says, “but I realized it’s my hike, and I should take care of myself - not worry about keeping up with everyone.”

As I get out my sleeping bag, I notice a small stuffed giraffe nestled into Good Times’ pack. I ask him about it.

“The giraffe was my mom’s,” he says. “She died a few years ago, but she was always the one to push me to travel. It reminds me of her – sometimes, when I see the sunset, I’m like, ‘Mom, see that?’”

The next morning, Good Times heads down to the office to reserve his bunk. “Do you want the good news or bad news first?” he asks us as he returns.

Missionary and I look at each other.

“The trail’s closed from Winding Stair to Wayah Gap.”

Missionary and I rush down to the office. Gabriel, from the Hiker Hostel, lounges out front next to a red handwritten sign: Trail closed from Winding Stair to Wayah Gap due to wildfire. In no time, a crowd of hikers gathers.

“They won’t let you through,” Solace warns as he walks by.

“I’d like to see them try and stop me,” Gabriel replies. “I’m fireproof - I’ll just hike at night.”

Missionary and I decide to give it a day to see if the trail opens back up. I don’t want to skip that section if I can help it, I think.

“The trail knows best,” Missionary says as we reserve our bunks for another night.

A few minutes later, a full shuttle of hikers pulls in. As the hikers step out, looking rather tired and unkempt, we spot several familiar faces. Matt. Tom. Our gang from Neel Gap.

That afternoon, we all head down to the local hiker bar: The Lazy Hiker, featuring specialty beers like the Slack Pack, Trail Mate, and Twentymiler IPA. We run into at least twenty other hikers, including some from the Hiker Hostel. Tom orders a flight of beers. Tony signs me up for a ping pong tournament, in which I lose spectacularly to Little Prince, but win a consolation glass of beer. After trying a few beer samples, I order a hazelnut one.

When the sun sets, I find myself sitting with Midnight Chef and Kickback, both from Connecticut. Solace passes by, orders a burger and complementary fries, then joins us. After taking a bite, he pushes the fries over to me.

“Thanks.” I dig in. Delicious.

Midnight Chef talks of working in a rehab center. “It can be very rewarding,” she notes, “but these people, they’re not always right in the head. You know the steps they should follow to get better, but they just want to use…”

“I used to skateboard professionally. I was sponsored and everything. Then, I got hit by a car. That really messed me up physically and mentally. I’d quit school to do skateboarding. The guy who gave me my name was really thoughtful about it. Kickback: I like to kick back and relax, but I’m also kicking back from that.”

Solace tells us stories from the year he thru-hiked: tales of walking to every town before shuttles were available, of facing several feet of snow in the Smokies, of having no water for three days. He explains how the hostel we stayed at, the Baltimore Jack Hostel, came to be.

“Baltimore Jack was a good friend of mine,” Solace says. “You loved him and you hated him; he was a scholar and an asshole; he thru-hiked 9 times and would give you the shirt off his back.

“He would do things like, if he saw a cute girl, he’d say, ‘You’re so good looking, a starving dog would jump out of the car to chase after you.” He’d drive by a huge group of hikers, roll down the windows, and shout, ‘Y’all should get a job!’

“When he passed, we named the hostel after him.”

We finish our food, and Solace offers us a ride back to the hostel in his van.

“Thanks,” I tell him as he pulls into the Budget Inn. “You’re amazing.”

As I leave, I hear him murmur, “You hear that, Bert? We’re amazing.”