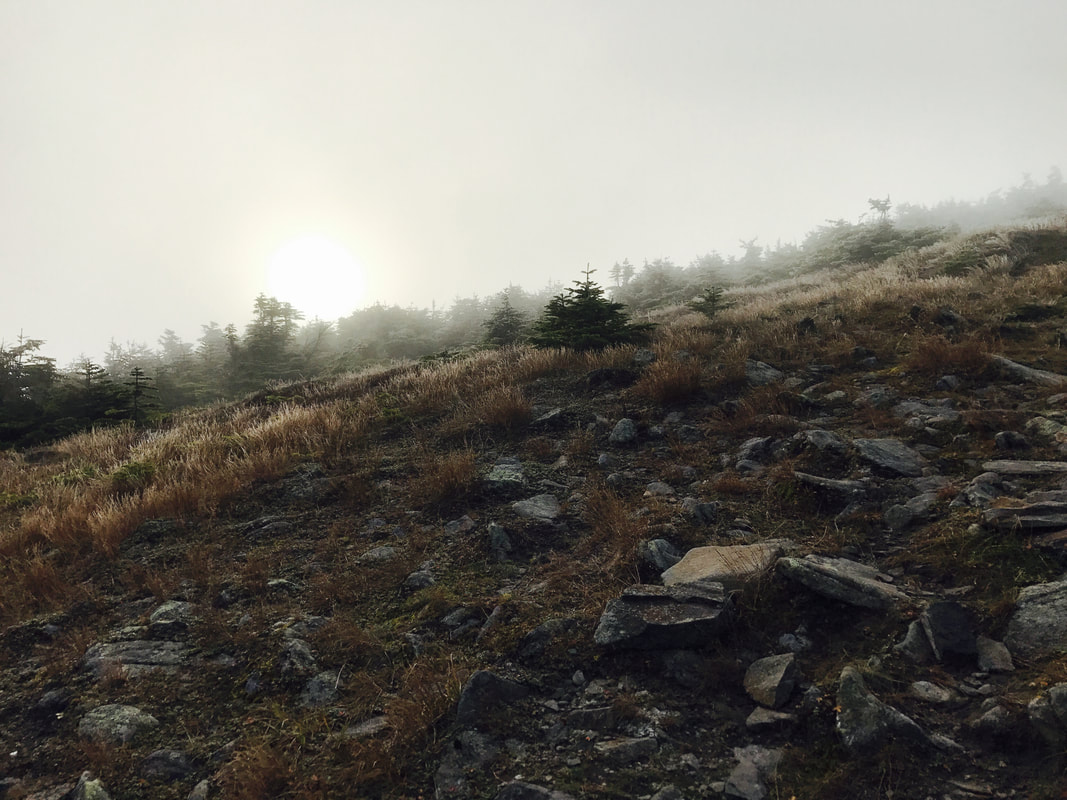 Three sets of mountains remain in my trek through the White Mountains of New Hampshire: the Kinsmen, Mt. Wolf, and Mt. Moosilauke. Tenacious and Nighthawk warned me about the difficulty of South Kinsman when we were in Maine. “The sketchiest thing I’ve climbed, ever, “ Tenacious christened it. So, it is not without some apprehension that I begin the long climb up the Kinsmen Mountains.

Lonesome Lake Hut, the southernmost of the AMC White Mountain huts, lies halfway up North Kinsman Mountain near the shores of Lonesome Lake itself. A wooden walkway borders the lake, and Cannon Mountain stands clearly reflected in the clear, still waters. I arrive at the hut just before lunchtime. To my delight, the crew has laid out the most impressive spread of baked goods that I’ve seen in the Whites. I savor a slice tres leches cake, still dripping with milk, and top it off with a slice of freshly baked bread. Thus fortified, I continue up the Kinsmen Mountains.

I crest North Kinsman first. The trail consists of boulders and rock slabs, many of which bear the unmistakable dents of trail maintainers’ tools. Wooden steps are bolted to the steeper rock slabs, and some areas sport carefully constructed rock steps. The Franconia Ridge looms in the distance, majestic and unyielding, seeming so far away, yet only a day’s hike from where I am.

The trail dips slightly before continuing to the summit of South Kinsman. Descending South Kinsman is quite unpleasant: not as steep as the Abol slide of Katahdin, but certainly ‘sketchy’ in some areas. I carefully slide down the rocks and make my way to Eliza Brook Shelter for the night.

For hours, I am alone at the shelter. The height of the southbound hiking season has passed, and fewer hikers frequent the southern tip of the White Mountains compared to those who hike Franconia Ridge or the Presidential range. Anticipating that no other hikers will arrive, I set up my tent in the shelter for extra warmth during the night.

As I finish my camp chores near sundown, I see another hiker walking up the hill to the shelter. His lean form looks vaguely familiar.

“Are you…Tree?” I ask as he sets his pack down on the shelter.

We’d started our hikes in Georgia on the same day. He is one of the few Asian hikers I’ve seen on the trail. He tells me he took a break from the trail for jury duty, and is continuing northbound for as long as he can before he must return for work. He carries what looks like one of the ultralight backpacks: while most Appalachian Trail hikers have traditional packs that weigh around 4 lbs, ultralight hikers favor lighter packs that weigh less than 2 lbs.

During his time on jury duty, he’d watched DIY videos and made himself a new pack from one-and-a-quarter 40-lb rice bags.

“The first bag only came up to here.” He gestures at a seam near the top of his bag. “So I cut up another bag and sewed it on top.”

That’s resourceful,  I think. Rice bags are light and built to withstand the weight of the rice within.

"I was in IT for three years, and photography for a lot...nine? I'm not going back...I'm going back to school. But it's not like any school you've heard of. I'm going to get my CDL. I'm going to be a truck driver." - Tree, northbound thru-hiker

The next morning, Tree grabs both our bear bags before we part ways. I will continue south over Mt. Wolf and Mt. Moosilauke, while he will head north over the Kinsmen and Franconias.

Mt. Wolf is not particularly difficult or memorable aside from a partially-obscured view of Franconia Ridge. The windy conditions today are slightly unnerving, but the abundant trees at this low elevation shield me from the brunt of the wind. I find the ascent of Mt. Moosilauke unpleasant. The ascent parallels an impossibly long series of cascades, and though I know the cascades are several feet from the trail, I feel the constant threat of falling down them.

Moosilauke, the last mountain in the Whites. Temperatures are freezing. Wind speeds should slow slightly tomorrow, but I may still face gusts up to 40 mph when I summit and descend Mt. Moosilauke. That night, I stop at Beaver Brook Shelter, which, at 3750 ft, stands just shy of the summit of Mt. Moosilauke. A couple section hikers kindle a fire that sputters and smokes in the wind. I huddle around the fire with them until nightfall.

"My specialty is the Cold War...there were so many engineering problems they had to solve. Like flying over the North Pole. No one knew how to do that before the Cold War." - Farm Boy, section hiker and history teacher

That night, I wear every layer I own - two pairs of pants with a couple shirts and three jackets - and still feel cold inside my sleeping bag. The wind howls all night, snapping branches that fall onto the roof with muffled cracks. I count the hours until 5:00 am - the time I can reasonably rise - as I struggle to get warm.

I move quickly to generate body heat when I get up. Forcing some breakfast into my mouth, I shove my filter down my chest to keep it from freezing, and take off in the dark.

Fog shrouds the trail in the dim morning light, casting a sickly yellow glow on all my surroundings. I walk through a graveyard of broken pines and listen as the wind blows through their barren limbs.

I switch on my music when I reach treeline. The theme from Pirates of the Caribbean blares in my ears, competing with the sound of the wind. The wind blows sharply against the rocks; everywhere it touches, I see delicate, feathery formations of ice. My jaw drops. I saw pictures of these frost formations in the museum on Mt. Washington: rime ice, created by crystallizing fog. The summit sign is so peppered with frost that I can barely read it. As I look down, I find the beginnings of ice crystals growing on my clothes and hair. I feel like I’m slowly turning into an icicle. Quickly, I take off my gloves, snap a picture, and leave.

There is a palpable difference in temperature below treeline. Below 1500 feet, I even see day-hikers walk past in t-shirts and shorts.

“I bet it was beautiful up there,” one man remarks.

“Um…it was foggy and icy when I was there,” I tell him.

“It’s probably melted by now,” I say. Blue skies had emerged about 10 minutes after I got off the summit.

I hike quickly, bolstered by the thought of finishing the Whites and getting real food in town. As the trail flattens out, I pass a man eating an apple. He points out several apple trees by the side of the trail.

“This was an old orchard,” he says. “I’d come here in the winter and take cuttings from the trees and graft them to root stock – keeps the varieties going.”

Curious, I approach one of the apple trees. The good apples are too tall for my reach. I try gently shaking the tree with little success, but content myself with a few bites from a small, misshapen apple down below. The apple is crisp and different from the varieties I’d tried in supermarkets - less sweet, perhaps.

Then, at 11:00 am, I reach the parking lot, where Mom awaits me. A sense of victory surges through me. I made it through the Whites!