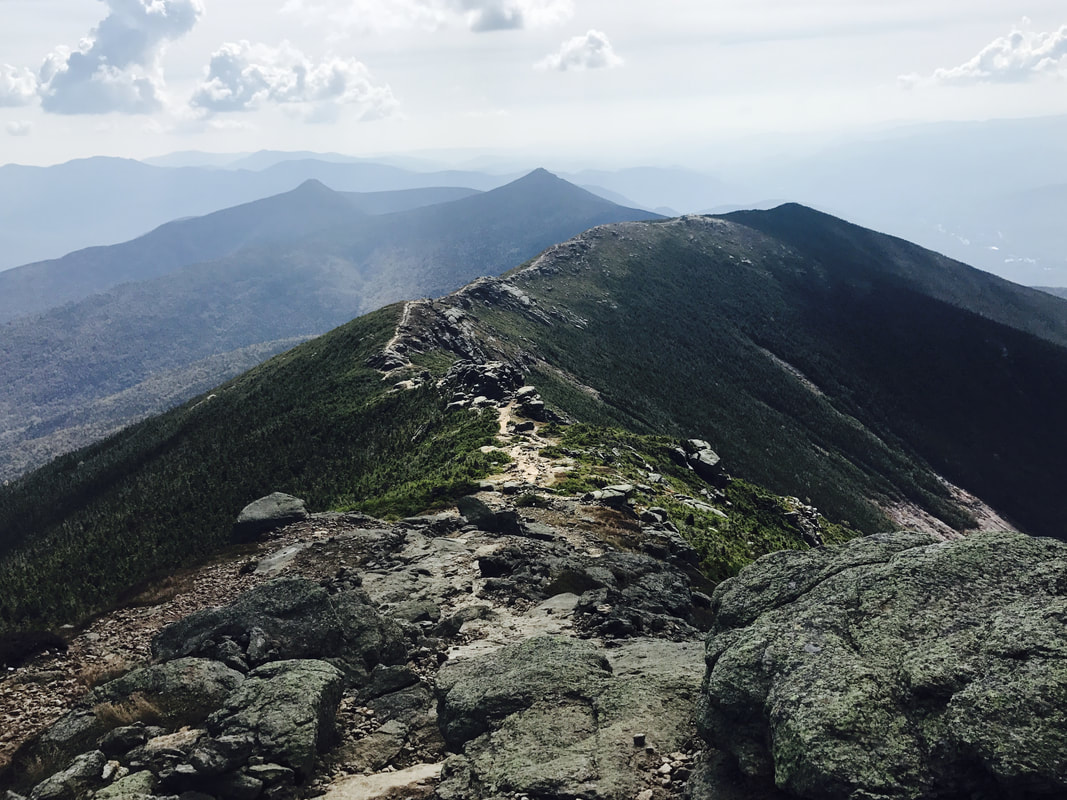 Mom starts driving me back to the Crawford Notch trailhead at 3:30 am, too early for my brain to register what I’m doing. My fear of heights remains an obstacle, but getting an early start on the trail forces me to deal with it. I enjoyed a few precious days of easy hiking in Maine. Now, I must hike south through the rest of the White Mountains. I expect rugged terrain. Mom watches me as I walk out of the parking lot and into the woods, her form getting smaller and smaller with each passing moment. By the time I fully wake up and realize I’m in the Whites again, I’m halfway up Zealand Mountain with no phone service. Lovely.

The AMC maintains several huts and campsites in the Franconia Ridge area. As in much of New Hampshire, hikers must pay to stay at each hut or campsite. I stop by Zealand Falls Hut for lunch, then continue on. I plan to refill my water a few miles later at Guyot Shelter, which my map lists as 0.2 miles from the trail. Unfortunately, the water turns out to be 0.8 miles downhill. There are no other water sources in the vicinity.

So, I end up hiking the 0.8 miles down to Guyot Shelter, getting in an hour before dark. Normally, a caretaker lives at the shelter and collects a fee for camping. Today, there is no caretaker or fee collection bin, so I pick a tent platform and set up next to a couple of section hikers. Another hiker arrives after dark.

"I grew up on a farm in Mississippi. That's one of the reasons. There are a few." - Big Country, flip-flop thru-hiker, on how he got his trail name

The next morning, it takes me 40 minutes just to get back onto the Appalachian Trail from Guyot Shelter - partly because I spend so long watching the sunrise over Mt. Guyot.

After grabbing a cinnamon bun at Galehead Hut, I continue toward Mt. Garfield. The trail follows a small waterfall up a wall of rocks, so that when I reach Garfield Ridge Shelter, my pants are muddy and wet.

There is no caretaker at Garfield Ridge Shelter, either; I have the place to myself until a trail maintenance crew shows up halfway through the afternoon. I spend an hour on the caretaker’s platform, taking advantage of the phone service there.

A bunch of hikers roll in later that night, including Fancy Free, whom I’d met at The Cabin in Maine. She tells me about her thru-hike several years ago and shares her mashed potatoes, which she spices up with raisins.

I catch the tail end of the sunrise on Mt. Garfield. Four concrete walls on a stone platform, the ruins of an old fire tower, stand atop the summit. As I admire the view, a girl pops up from the center of the walls, circles around the summit, and hops back into the ruins.

Huh. She must’ve slept there, I think. Cool spot to spend the night!

The trail between Mt. Garfield and Mt. Lafayette is rocky, with one sketchy slide down a one story cliff and a long climb up rock slabs to Mt. Lafayette. I throw myself at one particularly smooth rock slab, hoping my boots have enough traction to keep me aloft. Mt. Garfield is visible during most of the climb. I crest false summit after false summit. At the summit of Mt. Lafayette, the trail becomes a dirt path with just patches of rock, and the views – the views render me speechless

Aside from several dizzying drops down sheer cliffs lying but a couple feet from the trail, I enjoy a pleasant walk over Mt. Lincoln and Little Haystack.

Along the way, I meet a man who thru-hiked in 2005. His trail name was Three Cats.

“We did at the time. Now, we have one. Attrition, you know.”

I reach Liberty Springs Campsite in the mid-afternoon. Located just past Little Haystack, the campsite holds the first water source I’ve encountered since morning. There are no hikers there except a southbounder named Twin, who’s walking around in his underwear. With the lack of rain in the past week, the water is barely a trickle; it takes 9 minutes to fill my Powerade bottle and 20 to fill my Camelbak water reservoir!

That evening, I reach Whitehouse Brook. Tomorrow, I’ll reach Lonesome Lake Hut fairly early in the day and continue over North Kinsman and South Kinsman. I’m not particularly excited about the Kinsmen, but I’m already looking forward to baked goods at the hut.