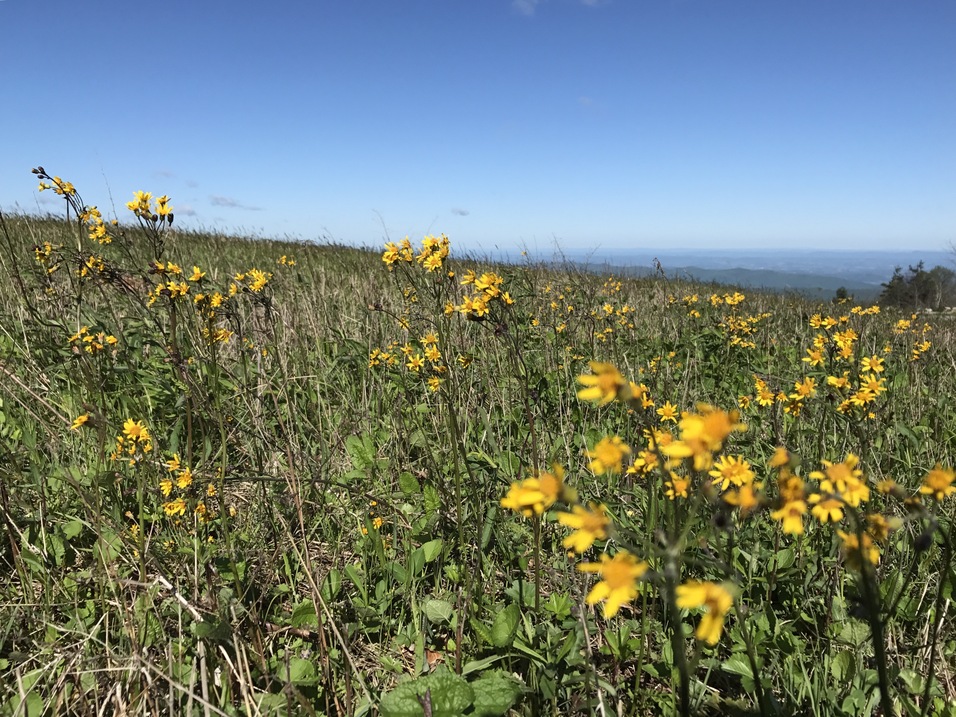 ‘Let me know when you’re in the Hot Springs, NC to Erwin, TN area,’ reads a text on my phone. Woody: a semi-retired friend I’d met on my first section hike last year. ‘I was thinking of parking at Devil’s Fork Gap and hiking south to meet you.’

‘That would work!’ I text back.

Devil’s Fork Gap. Just 9 miles away. On this rare clear day, I spend nearly an hour perched atop the peak of Big Butt Mountain - someone had fun naming the thing - basking in the warm glow of early morning sunlight. The fields and ridges of Tennessee are just visible above the treetops to one side; to the other are those of North Carolina.

“The first night, I caught, like, five fireflies. I put them all in my bug net, and put that in my tent, and I was like, ‘Ah ~ this is magical!’”

I spend a few more moments atop the peak before prying myself off the rock. A few miles later, I see Woody. His hair’s shorter, but otherwise, he’s just as I remember him: the same wide-brimmed hat, the same spectacles, the same smile. Beside him walks a shaggy black dog.

“Yeah. Remember, I said I’ll hike with him, but I won’t sleep with him.”

The hiker in front of me steps aside to let Woody pass.

“I’m actually going to turn around here and take her with me,” Woody says.

Last year, we’d both hiked south from Harper’s Ferry through a good stretch of Virginia.

“Do you want to stop for lunch?” he asks before we reach the next shelter. “I’ve got sandwiches.

“Ok!” I am thoroughly convinced.

Woody pulls out four sandwiches - turkey, tuna, and two roast beef - from a blue lunchbox, and offers a couple to me. Oh – I think as I take a bite, these are so good! These pickles – they’re delicious! Which is weird, because I usually dislike pickles. The McDonalds kind, anyways. My time on the trail has sharpened my senses to be extra sensitive to ‘real food,’ though, and these sandwiches are the best sandwiches I’ve had in my life, with just the right balance of meat, cheese, pickles, and mayonnaise.

“Remember that green bag I used to use for water, that I’d leave sitting out all night?” Woody asks me.

“Yes.” I can picture it now: a green accordion-fold bag full of water lying near the shelter tables.

As we hike back to the gap together, Woody talks about his AT adventures and points out the history of the area.

“I had the North Carolina AT plates for years,” he tells me, “and it said, 1DAY.”

He offers me a Dr. Pepper as we reach his car, which now reads AT16.

“Might I interest you in a hot shower, supper, and bed for the night?”

As we pull into the driveway, I catch a glimpse of a fenced in pasture and distant ridgeline. Beth, Woody’s wife, greets us both on the doorstep. After taking a shower, I take in my surroundings.

What a cool home, I think. Walls and staircases are lined with photos: family photos, exchange students, trips. A well-loved guitar stands in one corner. Here and there, I spot an elephant figurine or two. Woody’s AT photo book from last year lies on a coffee table, near a shelf full of photo books showing trips from years past.

I listen, gazing at each photo, as Woody and Beth recount their adventures on the AT and in the Rocky Mountains. That night, they treat me to a delicious dinner at the local Blue Mountain Pizza. Murals are painted on every wall. Stuffed ravens, relics of the last owners, perch atop a couple wall lights. As we drive back, we pass through the local park. A lighted fountain blooms in the middle of a pond, casting a faint glow across the road. What a magical evening, I think.

When I wake up, I find Beth and Woody cooking in the kitchen.

“I wouldn’t send you out of here without breakfast,” Beth tells me.

Woody points out one of Beth’s elephants as he fries eggs. “That’s a bank,” he says. “She’d been putting quarters in it since she was a child. Her dream was to go on a cruise to Alaska. When we went on that cruise, we took all the quarters out of the bank. There must’ve been about 700, 800 in there.”

Eggs, grits, biscuits, bacon, homemade jam - What more could anyone ask for?

As we finish eating, Woody asks, “Have you ever heard the song In Tall Buildings?”

“No,” I say, putting my dishes in the dishwasher.

“Many have credited that song for why I won’t work in tall buildings.”

He begins to recite the lyrics:

Woody drives me back to the trailhead after breakfast. I thank both Woody and Beth, though words can hardly describe how grateful I am for the little piece of paradise, the brief sense of home, that they offered me.

“When these towns first started up, they were coves that people settled in. Being from across the mountain was like being from another country.”

Hiking again after a day in town feels slightly disorienting as I readjust to the starkness of the trail. Presently, I come upon a vaguely familiar hiker I’d briefly seen at Standing Bear. He wears a baseball cap over close cropped hair. His beard is flecked with white. He steps aside to let me pass as he converses with a couple dayhikers.

When I take a water break, he catches up with me again. He introduces himself as 77. And now I remember someone mentioning him; he was known as Legend, for being one of the first 100 people to thru-hike the PCT.

“It’s the year I thru-hiked the PCT.”

I step aside to let him pass, only to find that we have exactly the same pace. We both end up stuck with each other for the next three days – not that I mind: 77 makes for good company, with many stories about being the Vice President of a construction business.

“The ones who are moving up act like they’re in a position higher than the one they’re in.”

We camp by a creek on the first night. The second morning, we hike up Big Bald to find the view cloaked by fog. Though the terrain should trend downwards to Erwin, we seem to hike over dozens of random hills over the next dozen miles. Pointless up-and-downs (PUDs), I remember reading.

As we go down yet another few hundred feet, only to shoot straight back up again, 77 says drily, “What goes down must come up. Oh wait – that’s not how it goes – well, here, it works in reverse.”

I flip through the logbook at the shelter, looking for signs of the trail crew I started with. I find an entry from 9:35 am: Silas, writing ‘Find Waldo on the hiker board.’ They’re a mere half a day ahead. A graffiti board is nailed onto one wall, with signatures from a myriad of hikers. To my amusement, I do find Waldo’s signature, complete with a drawing.

After cooking dinner that night, I treat my water with iodine, then add a Nuun electrolyte tablet to mask the taste.

77 and I decide to get up early the next morning, aiming to get into Erwin as soon as possible. Expecting rain, we both stay in Curley Maple Gap Shelter, which becomes increasingly crowded as the night wears on. Someone begins snoring. I sleep for about 3 hours before getting up at 5:00 am.

I have only one meal left: noodles. Each morning, I enjoy adding my Nuun treated water to cereal or oatmeal. Today, perhaps due to my sleep deprivation, I decide to cook my noodles with my Nuun water. People cook with beer and soda all the time. I think to myself. How bad could it be?

Unfortunately, this is not one of my better Nuun recipes. My tomato-and-Nuun noodles turn out sour and barely edible. Despite my hunger, I manage only half before pouring the rest down a cat hole.

77 laughs at me when I tell him. “Nuun Noodles,” he muses. “That would make a good trail name.”

Nuun Noodles. Hmm. I do like Nuun. Just not with noodles.

We make it to town at 9:20 am and head to Uncle Johnny’s Hostel. Rain begins to fall, more heavily than before. 77 catches a ride into the center of town.

“Do you have any bunks left?” I ask at the general store as I pick up my resupply.

After grabbing a few luxuries, including a Mountain House apple crumble meal, I organize my stuff and explore the hostel. At the entrance sits an old wooden sign with mile markers for nearby towns, Springer Mountain, and Katahdin. A gaggle of hikers lounges around the porch, snacking on goods from town. To the left is the hiker hostel, complete with a microwave. Further back, I find cabins and a bathhouse, all connected by pebble-filled walkways.

Matt passes through. “I think everyone is zeroing,” he tells me. “They were up pretty late last night.”

I end up pushing on a few more miles to Curley Maple Gap Shelter. That night, I consider changing my trail name from Not Bad to some variant of Nuun Noodles. Nuun Noodle? Noon Noodle?

I settle on the latter. This one, I think I’ll keep.

The next day passes in a blur. To my surprise, the sun comes out, and I actually have a view as I hike over Beauty Spot. As I descend, I catch sight of a small gnome house wedged in a hollow tree trunk. I turn it over and find a word written in black ink across the bottom: Random. Indeed.

In the mid-afternoon, I come across a large white van plastered with pictures of Casper, the friendly ghost. A man wearing a grungy sweatshirt and jeans gets off and offers me some soda and snacks. He introduces himself as Rob, the former owner of a hiker hostel up north.

“All of you are such unique individuals, and when you put everyone together, generally, a very happy thing happens.”

When I reach Greasy Creek camp, I look at the GPS on my phone, which says I’m 0.1 miles from a 20 mile day.

A couple hikers give me curious glances as I return, heading South. “Why are you hiking this way?”

I am surrounded by unfamiliar hikers in camp. I join Tenacious, a woman sporting a short brown ponytail, and Nighthawk, a young woman with pigtail braids, around the fire pit.

That night, I text the trail crew: ‘Where are you guys headed tomorrow?’