Through the Smoky Mountains: Days 18-23 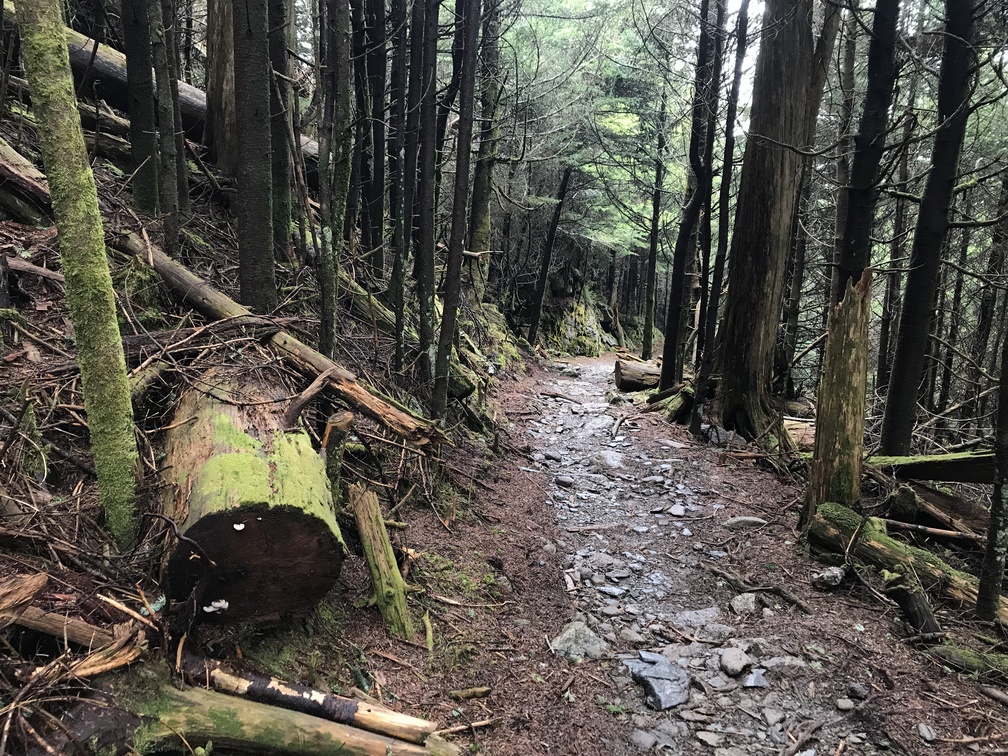 There is a brief roadwalk from the Fontana Hilton, across the dam, and into the surrounding woods before the official start of the Smoky Mountains.

“I wonder what it would be like to grow up in this town,” Silas says as we cross. “They must hear so many dam jokes.”

“The first night, I caught, like, five fireflies. I put them all in my bug net, and put that in my tent, and I was like, ‘Ah ~ this is magical!’”

Less than a mile later, we deposit our permits in the hiker registration box by the Smoky Mountains sign.

As we hike up, we pass a couple section hikers, one of whom introduces himself as Toe. He gestures to his necklace. “It’s my toe.”

From afar, the necklace looks like a pinkish yellow rock tied to a string.

We meet Toe again when we stop for lunch at a rickety old fire tower that sways in the wind.

“You can see the nail on the end,” Toe tells another hiker. Looking closer, his necklace indeed features what looks like a toenail.

“I had a hammer toe, which is when one toe goes over the other. My wife said, ‘You should really take care of that before you hike.’ So, I went to the doctor. He said he could put a screw here, a screw there - recovery’d take a few months - and the whole thing’d cost $40,000. Or, he could cut off my toe.

“I had a friend down the road who was a plastic surgeon, so I went down there and said, ‘Can you cut off my toe for me?’

“He said, ‘I’ve been wanting to cut that thing off ever since I saw it!’

“He didn’t charge me a dime. There’s this place in Yukon where they serve wine with a toe in it, so I called them up and asked them how to mummify a toe, which was what I was looking up. They said, ‘Well, here’s how we do it. Or, you can send the toe to us, and we’ll mummify it.’

“So, I threw it in a salt water bath for six months, and covered it with epoxy.”

Rain starts pouring down as we reach Mollies Ridge Shelter, the first shelter in the Smokies. I decide to stay; Silas pushes on to meet up with the rest of the group. A sign at the shelter helpfully points to water on one side, and the ‘toilet area’ down the other. There are no privies in Tennessee, and the hill is a minefield of raised dirt piles.

We string a tarp across the front of the shelter and hang our packs from the roof beam. Graffiti lines the walls. I spot one quote from the Lord of the Rings:

“It’s a dangerous business, Frodo, going out of your door. You step onto the road, and if you don’t keep your feet, there’s no knowing where you might be swept off to.”

I wake up to find a tent set up smack in the middle of the toilet area. Interesting choice of a spot, I think.

I hike alone through muddy trails in steady rain and fog. Ian passes me early in the day, slipping and sliding down the slopes.

“The trail is actively trying to kill me today!” he shouts over his shoulder.

By the time I arrive at the shelter, all my belongings are wet. The shelter tarp keeps most of the rain out. Other hikers have started a small fire in the fireplace and surrounded it with wet socks and boots, hoping to dry them out. My boots and socks are soaked with mud; I pull them off and add them to the pile. By the time I go to bed, the shelter is completely packed.

A drizzly rain continues into the next day, shrouding the Smokies in a dense white mist. Moss carpets the forest floor. Clingman’s Dome, the highest point on the Appalachian Trail, lies ahead. I cross my fingers for a view.

That day, I hike with two section hikers: Steve, a concrete foreman, and Luke, who works with pipes.

“What is the most valuable lesson you’ve learned at work?” I ask.

“Keep your head down, and shut your mouth,” Luke replies.

“I’d disagree with that,” Steve says after a second. “I like to bring some innovation to work. I think you can learn something from everyone.”

“Having kids saved my life.”

The view from Clingman’s Dome is just a gray backdrop, but the sun comes out just long enough for us to see a bit of the Smokies when we get down.

“It should be downhill from here,” I note.

“Doubt it!” Luke shouts from behind.

I laugh. We end up climbing another small hill before reaching the shelter. An hour after we arrive, rain begins pouring down again. As everyone cooks dinner, Steve walks around from the back of the shelter.

“Whose tent is back there? There’s a squirrel stealing food from it,” he says.

I go and take a look. As I stand under the overhang, a squirrel scurries into the tent. Seconds later, it emerges, holding a tiny morsel of food. It stands on the edge of the tent, perched atop a pair of crocs, nibbling away, then dives back into the tent.

Someone goes to wake the tent owner. “Well, he knows about the squirrel now.”

After several straight days of rain, my socks, boots, and pack seem perpetually damp. The smell of wet feet lingers in my clothes, in the shelters, and in the air. I ignore it.

A wooden sign marks the North Carolina - Tennessee border at Newfound Gap. Tourists and dayhikers are everywhere, photographing the scenery. I join the crowds, feeling slightly out of place, and eat my lunch. Several people glance curiously at me.

By early afternoon, the rain clears out, just in time for the view at Charlie’s Bunion.

After 14-15 miles, the IT band running down the side of my knee begins to ache. Maybe I’ll take it easy tomorrow, I think.

Though I consider taking a zero day, I can’t resist hiking when I see sun the next morning. This may be one of my only chances to hike in the sun in the Smokies.

A fellow hiker walks over to his pack, saying, “Let’s see if I have received the blessing of the acorns.” He shakes it out. “I have not.”

I stop for lunch at Tri-Corner Knob Shelter. My IT band still feels tender. About 15 minutes in, a uniformed young woman shows up, curly hair tied back in a headband.

“I’m the ridgerunner, Chloe,” she says. “Are you planning to stay tonight?”

“I haven’t decided yet,” I reply. I know that Carter, Tom, Silas, Kali, Jenny, and Kelly just zeroed in Gatlinburg; they may yet show up at Tri-Corner Knob.

“Well, the shelter’s about to become really clean, if you need convincing. I’m about to clean the shelter and privy.” She sits down and begins making lunch.

I decide to stay, rest my knee, and see if the trail crew shows up.

After finishing lunch, Chloe runs over to the fire pit. She makes a disgusted face as she contemplates the pile of cigarette butts in the ashes. “People suck,” she mutters.

I can’t help but think the same thing when I find half-decomposed toilet paper in a hollowed tree trunk after lunch.

The skies open up in the afternoon: Rain pours down in intermittent bursts. Around mid-afternoon, Carter shows up. Then, Silas. Jenny and Kelly. Kali. Tom. We’ve crossed paths intermittently ever since Neel Gap.

We all sit on logs around the fire pit for dinner during a brief respite in the rain.

“Where are y’all headed tomorrow?” I ask.

“There’s a campsite 17 miles away,” Kelly says. “It’s past the Smokies – we want to be done with the Smokies.”

“I want to be done with the Smokies, too,” I agree.

The 17 miles downhill fly by the next day. The rain holds off for most of the day. After a night of rest, my IT band feels much better. A sense of accomplishment rushes through me as I cross the northern border of the Smokies. We camp on the side of a stream, about a mile from Standing Bear Hostel. The forecast calls for rain.