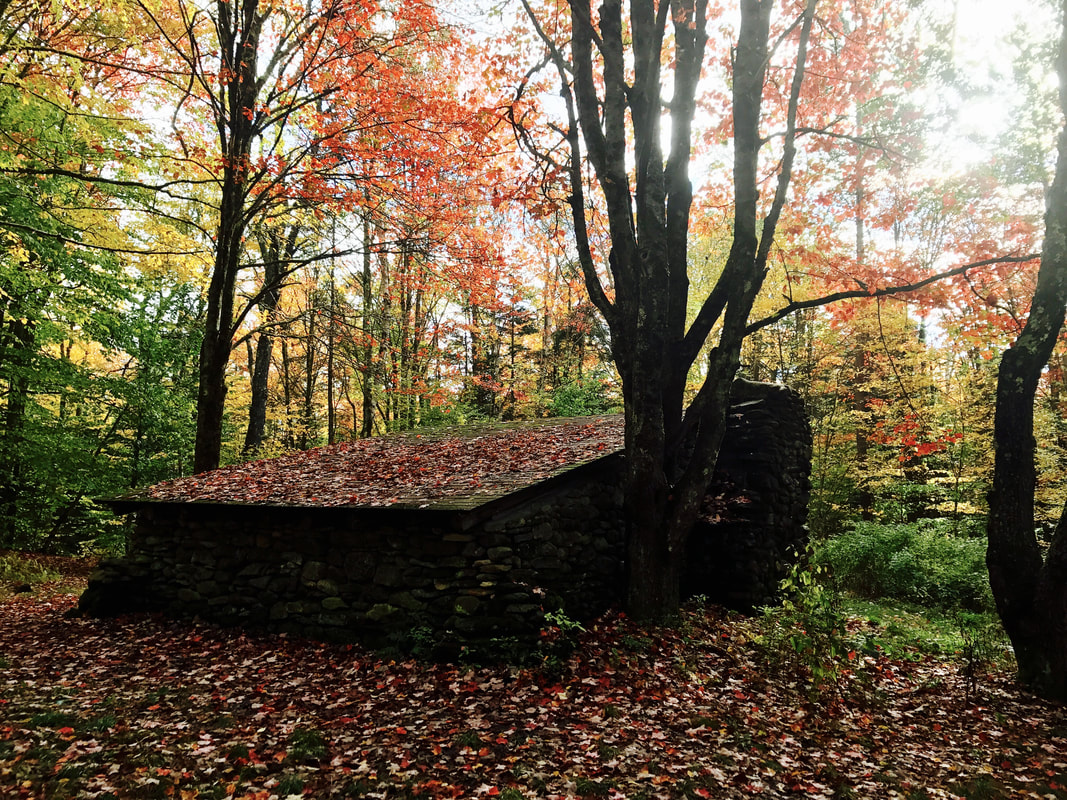 The Appalachian Trail follows a series of sidewalks through town, now and then turning sharply at a corner before continuing straight across a bridge over the Connecticut River. Students dressed in suits and pencil skirts walk past the stately brick buildings that surround Dartmouth Green. Long lines of cars drive by, heading toward campus. When I reach the Vermont-New Hampshire border at the far end of the bridge, I draw some curious glances from early morning joggers as I plop down next to the sign, grinning.

From the bridge, the trail continues along the road to Norwich, Vermont. Grassy lawns surround small-town houses that line each side of the road; I spot a Lion’s Club sign alongside a speed limit warning and remember the small New England town where I grew up. I stop by Dan & Whit’s, a locally owned grocery store. Notices and flyers, some over a year old, plaster the storefront. Inside, row upon row of tightly-spaced shelves are stacked with goods: sodas and sandwiches, snacks, pet food. I smile as I pick out a few post cards and a large can of Arizona tea, which I drink immediately outside the store. The Appalachian Trail in Vermont is beautiful: the nice twin to New Hampshire’s rough ways.

I walk through the town of West Hartford later that day. As I walk, I pass a sign hanging from a local truck lettering shop. Appalachian Trail. Camping and water symbols. Following the arrows on the sign, I find a water tap by the side of the shop, where I fill up my water bottles before heading into the woods once more.

As I climb a hill, I pass a rough, hand-carved wood bench engraved with the words ‘relax and enjoy.’ I’d seen a picture of that exact bench earlier in the day on James’ Instagram - I’d followed his posts after meeting him in the Whites. Will I catch up? I wonder.

I run into James just shy of Thistle Hill Shelter. We share the shelter with three retired section hikers that night. A dusting of newly-fallen leaves covers the roof of the shelter. The nearby spring drips over a moss-covered rock. I gather strands of moss together to concentrate the drips into a larger stream, then place my water bottles below.

“What have you learned since you retired?” I ask Dale, one of the section hikers.

“I’m still learning,” he replies. “What have you learned?”

“No matter how hard something is, as long as you keep at it, it’ll work out,” James says.

I’m thinking about Maine. “You have to know your limits. Know yourself and know what you’re up against. And sometimes, when things are really tough, you can’t do it alone. You have to lean on others. I leaned a lot on my trail family through New Hampshire and Maine. There were three of us, and not one of us was strong all the time.”

The trail passes near several farms the next day. I skip the first two in favor of the third: On the Edge Farm, located 0.25 miles from the trail on VT Route 12, home of some reputedly amazing baked goods. A spiral bound trail log sits under a sign at the trailhead near the road. I flip through a few pages. Some entries say the farm is on the right; others, the left.

I head left. 15 minutes later, I find myself at a small farm with a pumpkin and squash stand. I scan my GPS. I’m more than 0.25 miles from Route 12. Sighing, I turn back. Another half hour later, I finally see a sign for On the Edge Farm. It’s difficult to describe the feeling of encountering ‘real food’ after days of eating hikers’ rations. By now, all my hiking rations taste the same to me. I’ve taken to eating as quickly as I can during mealtimes, barely noticing what I’m shoving into my mouth before continuing on. The owner of On the Edge Farm lets me fill my water by the side of the store, relax on the deck, and throw out my trash in her large trash bins. I pick out some apple cider, house-made chocolate chip cookes, and an apple puff pastry.

I’ve never had a better pastry in my life. The apple puff is crispy on the outside, with layers of flaky, buttery dough surrounding the perfect amount of cinnamon-apple filling.

Rain hits for two hours after lunch the next afternoon. Still, I make good time, reaching Mountain Meadows Lodge by 4:21 pm. The lodge is a wedding venue on the trail; it accepts hikers’ packages and occasionally allows hikers to tent on premises. When I arrive, a wedding is in full progress. Clearly, tenting will not be an option tonight. A worker asks me to leave my pack on the trail before sneaking me around an elaborate wedding photoshoot to grab my package. I stuff everything into a large trash bag and haul it back to my pack, garnering some weird looks from wedding guests undoubtedly wondering why I’m absconding with what looks like an armful of trash. Once back to my pack, I shove the entire bag into the bottom and hurry on.

A plethora of wedding guests and tourists roam the woods. The paths are flat, and many people head toward the nearby Thundering Falls. There is a state-run campsite - Gifford Woods - a bit over a mile ahead. I reach it about an hour before sunset. The rangers at the check in station offer me a bottle of coconut water! They even let me plug in my battery pack overnight! Good thing, since my battery is running dangerously low.

After organizing the contents of my package, I locate the coin operated showers. With only one quarter on me, I end up taking a brief, freezing shower. Better than nothing.

That night, I hear the drums of the wedding band and whoops of the guests from the my tent.

Dawn brings a smattering of rain, which continues as I climb up Mt. Killington, the last 4000+ ft peak I must climb on the trail. The trees sway alarmingly, seemingly too tall to bear the wind. I move slowly, exhausted from a lack of sleep, my blaze orange poncho draped over me so that I am unmistakable from at least a hundred feet away. I pass a couple of hikers with a dog. The dog starts barking furiously. Its owner grabs its vest.

“It’s ok. It’s only a poncho,” she says as the dog’s legs work furiously in the air.

Around lunchtime, I reach Cooper Lodge, a four-walled shelter just downhill from the peak of Mt. Killington. Graffiti lines the roof and interior, and along the walls are gaping holes in place of windows. As I eat lunch at a picnic table in the middle of the shelter, fat drops of rain begin falling on my head. On the far end of the cabin, a huge puddle has developed on the floor under the furiously dripping roof. Each gust of wind sends a blast of rain into the shelter.

Still, any roof is better than no roof. I stay for half an hour to wait out the worst of the storm. A peak bagger, a hiker attempting to summit all 4000+ ft mountains in the area, pops in and informs me that there are 50 mph winds on the summit. Since the trail bypasses the summit, I decide to skip the 0.2 mile detour up to Mt. Killington.

A few miles later, I reach Governor Clement Shelter under cautiously cloudy skies. Unlike Cooper Lodge, this shelter is sturdy and built of stone, with a roof overhang larger than any shelter I’ve seen. A fireplace lies inside. It is perfect for rain. I set my socks, poncho, and boots outside to dry. When I grab a flat rock to cook dinner, I accidentally squish a slug on its side, resulting in a repulsive explosion of slime.

Long trail hikers KC and Loren soon join me. KC offers me a generous chunk of dark chocolate as they start a fire in the fireplace.

I bring in my boots before nightfall, holding them an arm’s length away by the tips of my fingers. KC laughs. “Don’t pretend those aren’t yours! They carried you a long way.”

It pours the next day, so the three of us zero in the shelter.

The following morning, I meet Mom at VT Route 103. We end up staying in the town of Rutland, home of the Yellow Deli. The Deli is a hiker hostel and sandwich shop owned by the Christian Twelve Tribes community; it is infamous among hikers. Before returning to Route 103, I visit the Deli. Calm guitar music floats through the building. Colorful, hand painted murals and carefully carved wood decorate the walls. A man and woman wearing traditional, conservative clothing greet me. Their eyes immediately fall upon my AT pendant.

“Will you be staying with us?”

After I tell them I’m just stopping by to pack out a sandwich, they show me the hiker hostel - in case I change my mind - and hand me a cup of peach maté.

The hiker hostel is next door to the sandwich shop. There, I meet Mello and Flapjack, whom I’ve seen in countless trail logs. They’re a couple days ahead, having reached Manchester Center already. I also find James. A Yellow Deli worker kindly brings my sandwich to me as I chat with them.

Then, it’s time to head back to the trailhead. Within a mile of the road, I come to a cliff overlooking a nearby airport. Twin - whom I’d last seen walking around in his underwear at Liberty Springs Campsite - sits there, smoking a cigarette as he takes in the view.

“Have any noodles?” he asks, referencing my trail name. He gestures to the overlook. “Terrible view!”

I laugh. He tells me he hiked until 4:30 am last night, making 21 miles total. Then, he says, “I was hiking up Mt. Cube, and there was this woman at the summit, looking for her dog. She gave me her number and told me to call, you know, just in case I saw it…I was on the summit of Mt. Smarts, and when I went to the privy, there were two beady eyes looking back at me. That was when I put two and two together.”

Something clicks into place. The two dogs I’d seen on Mt. Cube - he was the AT hiker who rescued Pippa! He fills me in on the rest of the story: he’d cuddled with Pippa in the privy until her owners arrived. Beau ran down a side trail and was found a couple days later, 25 miles down that path.