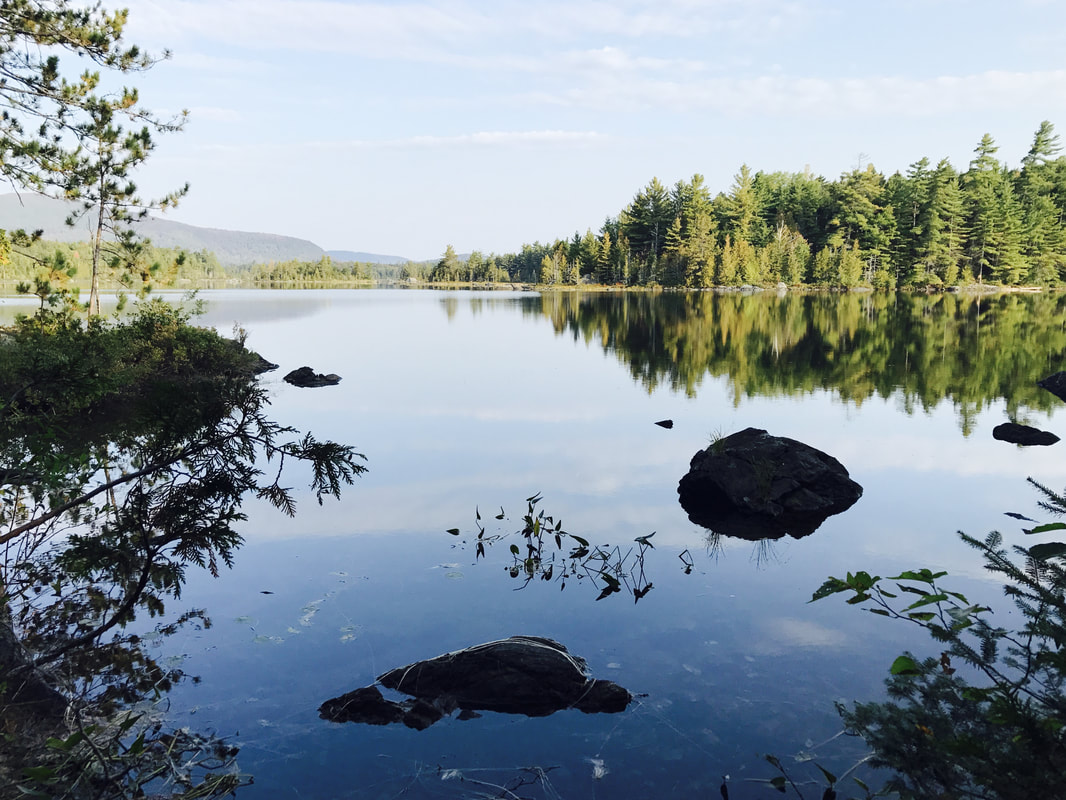 The trail is flat! Dirt trail, road walks, sturdy board bridges across alpine bogs - is this even Maine?! Gone are the rugged rocks, the barren mountaintops, and impossible slopes. In their place, a robust canopy of leaves tinged with the first hints of autumn overlooks dense forests, streams and beaches, and gravel roads.

At East Carry Pond Beach, I set down my pack to wait for Tenacious. A leech drifts toward the shore, twisting and contorting in a bizarre dance. It is my first time seeing one, and despite feeling slightly disgusted, I find myself oddly fascinated by its movements. Fully contracted, the leech looks slug-like and chubby, no larger than the tip of my pinkie. Expanded a second later, it elongates itself into a fine line as long as my middle finger.

Good thing I’m not swimming in there, I think.

Tenacious and I tent on a somewhat-flat piece of land beneath a copse of young pine trees. The yips and howls of coyotes continue all night; around 11:30 pm, I even hear the soft pad of dog-like footsteps by our tents. There is a pause, a sniffing noise, and then the padding steps fade away. Tomorrow, we will cross the Kennebec River, then rendezvous with Nighthawk in the town of Caratunk.

We walk by streams and waterfalls along nicely graded trails to the Kennebec. Since Alice Ference drowned attempting to ford the river in 1985, the Appalachian Trail Conservancy has provided a free ferry service across. The crossing is 400 ft wide and the current, swift; a hydroelectric dam upriver releases water into the Kennebec each day, causing water levels to rise several feet in the span of minutes.

When I get to the Kennebec, I find a line of six hikers waiting for the ferry. A one hour wait time. No matter; I take a seat on a rock and get some journaling done.

An hour later, Tenacious and I carry our packs down to shore and fill out a couple liability waivers. We watch as the ferryman - Robert - paddles over from the far shore. He hands us a couple life jackets before coaxing Tenacious into the canoe with precision, encouragement, and humor.

“I know hikers don’t have sea legs,” he says. “Here’s what you’re gonna do. You’re gonna hold on to the sides…” He puts both hands on the sides of the canoe, stabilizing it. Both feet go in; he walks to the back. Then, he lets go and flails around, pretending to not have sea legs as he rocks the canoe back and forth alarmingly.

“In all my years, I’ve found that if you have a fear, go after it,” he tells us.

I get into the bow, and Tenacious slides into the middle. Robert pushes us into the river, lowering his oar into the water.

“Should I be paddling?” I ask as we approach the middle of the Kennebec. I have one of the oars in hand.

“That depends. Are you enjoying yourself?”

“Then don’t worry about it.”

We reach the far shore. Robert carries our packs up from the boat, explains how to get to Caratunk by scratching a map in the dirt, and sends us on our way.

After stopping by the post office and Caratunk B&B for milkshakes, we call the Sterling Inn for a ride. The Inn is clean and quaint, with each room named for a landmark in Maine: the Kennebec, the Penobscot, Katahdin, the Dead River –

We relax, do laundry, and watch a movie. The washer breaks, so the owners end up doing our laundy for us in the employee washer. Our clothes have never been cleaner!