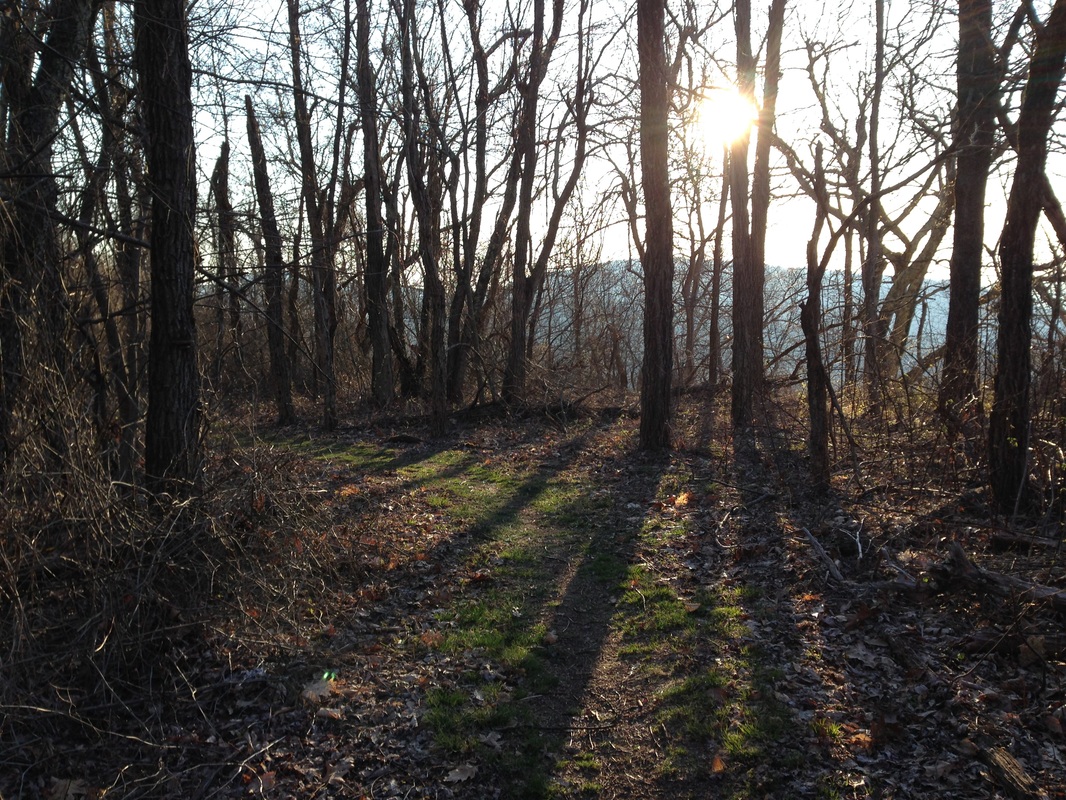 I clip my washed laundry on my pack to dry and hike out in my down jacket. Water trickles from rock springs along the trail, forming icicles along the rock face and pooling into patches of ice on the ground. I drop my pack to refill my water. Droplets of water splash onto my jacket, freezing into little dots across my sleeves. I glance at my pack. My laundry has frozen into blocks of ice!

As I hike past a campground, a dayhiker catches sight of me: “Are you a real hiker?!”

She excitedly motions for her husband to take a picture of us.

“Do you mind if I share that with my friends in Taiwan?” she asks.

Late that afternoon, I run into Captain Yoga Pants and Gentle Ben slackpacking - hiking with day packs supported by a car - from Bearfence Hut.

“Lil Phoenix! You made it!” Captain Yoga Pants shouts, before warning, “There’s snow forecast for Saturday.”

As we part ways, he adds, “You’ve got company down there.”

Company? I head down and peer into the shelter to find Phlatlander sitting in the top bunk, bundled in her sleeping bag. She keeps the bag wrapped around her as she shuffles down to start cooking dinner.

“I wish I had one of those sleeping bags with arm and leg holes.”

I laugh as I light my stove. “Like one of those snuggies?”

"I've never heard of a good reason to hike the Appalachian Trail. You either want to, or you don't." - Phlatlander

After awhile, a northbound hiker with a white beard joins us and introduces himself as AT Wheeler. After letting down his pack and preparing dinner, he asks, “Want to hear a hiking joke?”

“What did the girl mushroom say about the boy mushroom?”

Phlatlander and I look at each other cluelessly.

Later that evening, AT Wheeler begins narrating his life story.

“My first wife and I were married 40 years. She fought breast cancer for three before she died… When I got married again, I promised my wife that there would be nothing left unsaid, nothing left undone, between us.”

Hearing other hikers’ stories is one of the highlights of the trail for me: There is so much potential to learn from other people’s lives and perspectives, and the trail teems with people I would never have met otherwise.

“I just wanna say, if you’ve got someone you love, and you want to do something with ‘em, do it now. You never know when tomorrow might not come.” - AT Wheeler, 72 year old thru-hiker

“At my age, I have nothing left to prove. I’ve lived a blessed life: been lucky enough to have two women find me interesting enough to fall in love with me, three grandkids, a chainsaw that starts on the first pull…” - AT Wheeler

Hope. Fear. Despair. Gratitude. Boredom. Friendship. Joy. Some days on the trail seem like lifetimes, careening through a roller coaster of experiences and emotions, each emotion amplified by the solitude of hiking alone. Other days blur together, as though no time passed at all.

For the first time since I started hiking, I sleep through the night.

Fog encloses the trail. Passing a campground, I watch campers packing up as though through a smoke screen. They seem so far away, their lives so far removed from mine.

In the early afternoon, the trail takes me past a ranger station to US 33, the highway leading to my second mail drop. I call the motel I plan to stay at, hoping for a shuttle to town.

“I don’t know what to tell you,” the woman says on the other end. “We don’t really have a shuttle service. There’s no one here I can send to get you.”

What next? Do I hike several miles into town along a highway? Try to hitch a ride?

Gathering my wits about me, I hike down to the ranger station. A hiker with a grizzled beard and a black beanie stands outside, his pack and poles leaning against the walls. I peer inside a window.

The ranger on duty glances up, catches sight of me, and swings open the door.

“I’m looking for a shuttle into town.”

“I’ve got a list of shuttlers. Or, that gentleman out there is waiting for a ride. You might try asking him.” He points to the hiker outside.

And so, I meet Mayhem.

“My girlfriend’s picking me up. If you want, I can text her and ask. She’s a hiker; she’ll understand.” He holds up his phone.

When we pull in front of the motel, I turn to Mayhem and his girlfriend. “Thanks for the ride. You two are my trail angels today.”

"Last night, this one guy had a mouse trap. He'd put one drop of peanut butter on it and put it out. The first two he dumped into the fire. The third he laid out in front of the shelter." - Mayhem

Within seconds, three guys pop their heads out the lounge door.

One guy looks directly at me. “Hey, you want to split dinner? We’re thinking pizza.”

The lounge is dimly lit. Two mottled couches line the walls, alongside several bright vending machines. A phone book and flyer advertising Goodfellas pizza lie on an end table beside the couches.

“Are you thru-hiking?” I ask, sinking into one of the couches.

“Kyle is. We’re actually seeing if we can rent a car to go home – I think that guy’s getting a little homesick,” he jokes, pointing to a third guy before walking out with his phone.

I stay in the lounge for awhile. Kyle introduces himself as Trudge, and the other two as Mike and Todd.

Around 7:00 pm, Mike and Todd return with their rental car. We all pile in to head to Goodfellas in town.

Locals pack the restaurant. This place must be good,  I think. I feel slightly self conscious as I enter in my rain gear - I threw my other clothes into the washer - but quickly forget about it when our pizzas and calzones come out of the kitchen.

That night, Mike treats us all to dinner and refuses to take my money. For the second time in a day, I experience unexpected kindness in the trail community. I am struck by the interdependence the trail: Many of us hike alone, but we depend upon each other’s kindness, companionship, and wisdom.

“So what do your parents think?” Todd asks.

“That makes sense then.”

It’s nice to know I can always stop if I need to and keep on going.” - Kyle (AKA Trudge), attempting a thru-hike from Shenandoah National Park

They say that hikers’ trail legs come in by the end of week two. On the fourteenth day, for the first time, I enjoy hiking at a two hour pace for the entire day.

Though the trees remain bare, green shrubbery begins to carpet the forest floor. The valleys, too, show signs of spring.

I pass a ranger cabin and gravel road a couple miles from Pinefield Hut. A group of day-hikers gathered at the trailhead in full winter gear begins clapping as I approach…

“You’re almost at the shelter,” one hiker tells me.

Another asks, “Are you thru-hiking?”

“I’m doing a long section - I’m going until I have to go back to school.

One hiker, a slightly pot-bellied older man sporting a bright orange hat and puffy down jacket, walks up and gives me his trail name.

As he leaves, he offers me several granola bars.

That afternoon, I reach the shelter. The stone structure lies empty except for one familiar face: Woody!

Woody sits on a camp chair, leaning back against the stone wall, his hood pulled up over his graying hair. On this cold day, after taking a zero day, I thought all the southbound hikers passed me! I offer him the granola bars I’d received earlier.

“Met AT Wheeler on the trail,” he tells me. “‘Don’t see many white beards out here,’ he said. He wanted to ascertain that he was the oldest one on the trail - he’s got a good ten years on me.”

As dusk draws near, we gather firewood to pile into the fire ring. Woody builds a nest of twigs below the logs. As he lights them, he begins singing softly in his low voice:

"Well, my last name is Woodson, and all through school my friends all called me Woody." - Woody, '16 flip-flop thru hiker

I much prefer sleeping on the hut floor to sleeping outside in subzero temperatures!

“See you on the trail,” I tell Woody at dawn.

“Ok.” He scrapes the last of his breakfast from his pot.

At 9:00 am, I stop at Ivy Creek to refill my water and enjoy second breakfast. Shortly afterwards, Woody walks by, his lilting gait instantly recognizable.

“Gonna see if I can get lunch at Loft Mountain Wayside,” he says, disappearing around a bend. In the Shenandoahs, seasonally open waysides and camp stores lie throughout the park, serving hikers and vacationers alike.

Early that afternoon, I pass Woody sitting on a log, attempting to send a text message. “Got my first taste of trail magic today,” he tells me. “A couple trail angels at the wayside asked if I was thru hiking. I said, ‘Yeah.’ They bought me lunch.”

I am glad that Woody ran into trail magic. Coming to the trail with no expectations of trail angels or trail magic, I hope never to take these people and their acts of kindness for granted: Every act of kindness I’ve encountered holds a special place in my memories.

By 4:30 pm, I reach Black Rock Hut after hiking 13 miles. The wood shelter has two levels, with the second level accessible via wooden blocks nailed to two support beams. One northbound hiker already sits in the shelter. He introduces himself as No Hurry.

“I’m in no hurry,” he replies easily. “I pushed too hard last time - I was doing 25 mile days every day - got injured and had to get off. If I hadn’t got injured, I’d’ve finished in December.

Woody arrives soon after. That night, six more northbound hikers pile into the shelter. As they gather firewood and start a bonfire, I overhear snatches of conversation.

“Do you ever get the midday doldrums?,” one asks, reaching into his pack.

So I’m not the only one, I think. As I gradually adjust to the physical demands of the trail, I find myself settling into a routine. The physical rigors become easier day by day, while the mental rigors vary each day. Sometimes, the midday doldrums manifest as boredom or homesickness: I fight to remember why I came, to remember that come morning, I will wake with renewed purpose after overcoming the challenges of the previous day.

“What brings you to the trail?”

We all gather around the picnic table for dinner. No Hurry calls in a favor to get pizza delivered to the shelter. Soon, a smattering of ramen, granola bars, and various other foods lie across the table. I begin preparing my dehydrate vegetables and noodles.

“Spent all winter dehydrating my own food,” Woody says, pulling out a vacuum sealed plastic bag. “Thought it’d turn out like Mountain House meals, so I’d just have to boil water and add it in, but the peas turned out crunchy when I tried.”

Woody certainly has some of the fanciest meals I’ve seen on trail, I think as I climb onto the upper deck of the shelter and unroll my sleeping bag.