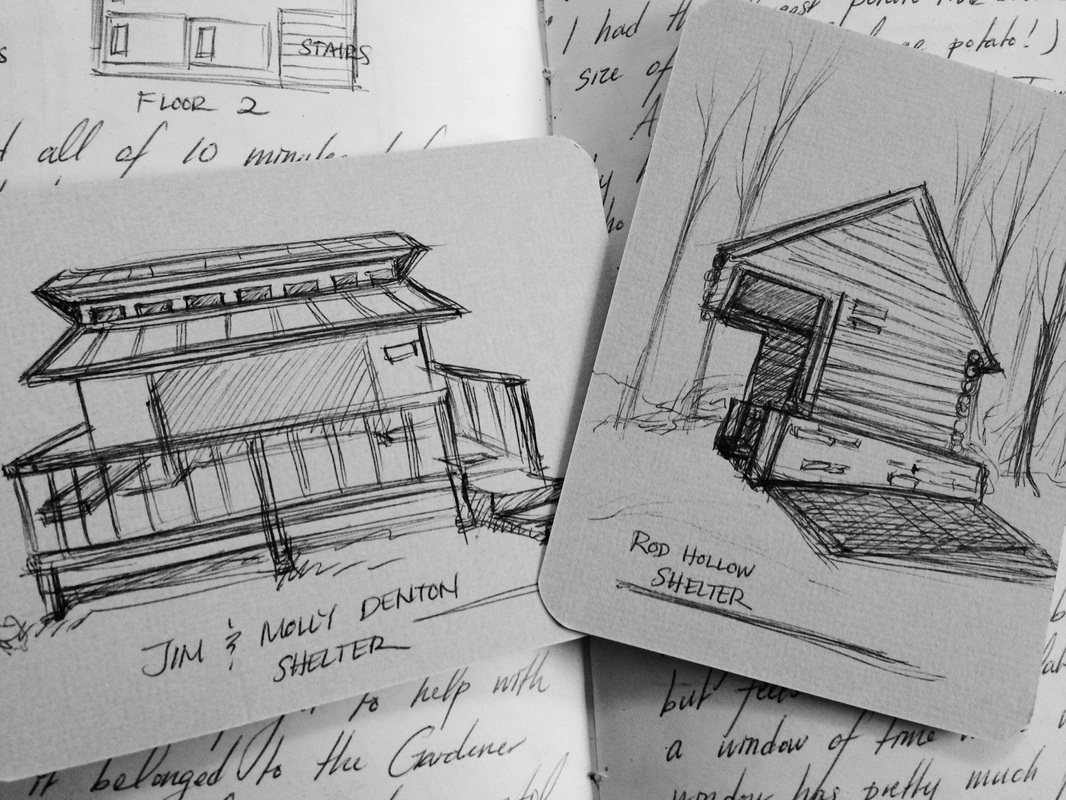 2016-03-27 — Harper’s Ferry
Determination. Resignation. Acceptance. As I stand in the middle of the parking lot, posing for these last couple pre-hike photos with my parents, the lack of fear or nervousness surprises me. For weeks, I planned and prepared for this. For weeks, I agonized over details and struggled to embrace the uncertainties of hiking.

A red van parked next to our rental car sports a bumper sticker: Halfapp Trail Angels. A woman sits in the driver’s seat, occasionally glancing up from her phone to scan the parking lot. My mind flashes back to stories I’d read about trail angels helping stranded hikers and performing other random acts of kindness - ‘trail magic’ - along the Appalachian Trail. How reassuring to meet one on my first day!

As soon as we pop open the trunk, revealing my overstuffed pack, the woman in the van jumps out. She wanders around the parking lot, waiting for us to say our goodbyes before introducing herself.

She hands me a wristband with her number.

“If you ever need anything, we travel anywhere within 100 miles. Don’t be afraid to call.”

“You’ll be fine. Once you’re in there, your instincts will take over.” - Ronda, Halfapp trail angel

Within the first five minutes, a stray gust of wind steals my cap!

Within the first few miles, I cross from West Virginia into Virginia. Now that I’ve begun, my mind turns from the tingling of anxious anticipation to the reality of survival. Instinct. I’m counting on my instincts to adapt to whatever situations I encounter.

I am here for the challenge.

I awake to the steady pitter-patter of rain against my tent.

Time to get up, I repeat to myself for the umpteenth time. You have to keep moving; staying put will get you nowhere. It’s raining now - nothing you do will change that - but one day, the sun will come out. That’s for sure.

Slowly, I roll out of my sleeping bag and begin to break camp: I let the air out of my sleeping pad, stuff all my belongings into their respective sacks, and tie up the tent. 2 1/2 hours. In a couple weeks, perhaps, I’ll get that down to 1.

I quickly get used to the rain. Fog blankets the valleys below. Through gaps in the trees, I glimpse snatches of wintry half-barren mountainsides. Further along the trail, golden buds and small flower blossoms herald spring. I hope spring shows up in the Shenandoahs, I think.

By midday, the sun breaks through the clouds.

The roller coaster: 13.5 miles of rocks and jam-packed up-and-downs. I laugh at reading ‘trail boss,’ picturing a cross between a mafia lord and a burly farmer lifting rocks with lines of minions in tow. Though my legs begin to tire by midday, I push on, lured by the prospect of seeing Bear’s Den Hostel: My guidebook notes its ‘castle-like’ appearance.

A stone wall lines the perimeter of the Bear’s Den grounds, leaving enough space for a gravel road that extends from one end of the grounds to the other. Several cars lie parked before the hostel, which I find more reminiscent of a solid stone cottage than a castle.

As I walk up, a white-haired woman in a black wool winter jacket emerges from her car. “They don’t open until 5,” she yells across the wind.

No matter: I only wanted to see the place before continuing down the trail. An old, rusty faucet sticks out from one side of the building. Potable water! Heaving my pack off my aching shoulders, I hurriedly fill each of my water containers, happy to find running water that I don’t have to filter before drinking. I relish the feeling of washing my hands with soap and water instead of hand sanitizer; I am overjoyed to find trash cans nearby, into which I dump the couple days’ worth of trash I’ve been carrying.

After a quick lunch, I head off again.

As I crest a hill late afternoon, a tall man, brown beard roughly cropped, pick axe in hand, appears ahead.

“Harper’s Ferry, southbound to wherever I end up before school starts,” I reply.

“Well, this is the most challenging terrain you’ll get in awhile. Once you hit the Shenandoahs, you’ll see. Nice, rolling terrain. Really graded.”

“Yep. I thru-hiked last year. Figured I ought to give something back. My trail name was Wreck. I got it after hiking the Whites with my son. After that, I was literally a wreck.”

“My son’s name was Nopants. Once, he was doing his laundry and left an extra pair behind. The hikers behind him found them - when they caught up to him, they said, ‘we weren’t sure what we’d find!’“

I thank Wreck for his work on the trail, grateful to the scores of volunteers who keep the trail running.

"The toughest days are the days you expected to be easy, but are actually hard. Maybe the terrain is harder than you thought. Maybe the weather isn't holding up. Maybe your body isn't cooperating." - Wreck, '15 thru-hiker

Over the past few days, I grow increasingly aware of my swollen feet, flattened like pancakes from carrying the weight of my pack. Just stuffing my feet into my boots causes discomfort that becomes all-out pain as the day wears on. My toes feel crushed, as though someone hammered them into place, and jolts of pain punctuate my every step. At the end of each day, my mind becomes locked in a fierce, silent battle between staying positive and complaining about my feet:

‘You’ll feel better in the morning. You can do this. Just keep going.’

… and so on and so forth until I stop to set up camp. The ridiculousness of this mental chatter amuses after every night, at least until the pain starts up again.

I recall a line from a thru-hiker’s memoir: Never quit on a bad day. To this, I add the mantra, ‘Never quit at the end of the day:’ Toe pain clearly impairs my reasoning.

At sunset on my fourth day, I limp into camp, swinging my hiking poles like crutches. After pushing for my first thirteen mile day, I breathe a sigh of relief when I see Dick’s Dome shelter perched on the edge of a stream ahead. Though a number of shelters lie along the Appalachian Trail, tonight will be the first night I spend in a shelter instead of my tent.

"90% of people get off the trail because of themselves. They can't deal with no comforts. Their pack is too heavy; the trail is too hard. The trail is 90% mental and 10% pain." - Jarod, or Mosey (full trail name Mosey Mosey Breaker Breaker 1-9), northbound thru-hiker

A campfire rages in front of the shelter. Two men loom ahead, silhouetted against its glow. As I pick my way across the stream bed, both men look up.

“Hey, I’m Little Mack,” the one closest to me says. “That’s Mosey. You might want to be careful of him. He lives on the trail.”

“You live on the trail?” I repeat  incredulously, turning to the second man.

“I’ve been doing this since 2005: biking, kayaking, hiking. Once, I paddled from Washington to Alaska. Didn’t even need a passport. I started at Springer on January 18. I’ve got no family except my mom - my grandmother’s dead. These are my grandmother’s sheets.” Mosey points to his grey headband and scarf.

“I don’t filter water,” he continues, holding up his water bottle. “I don’t get sick. If I do, I don’t think about it. Sometimes, though, if there’s stuff in it, I’ll use this.” He sweeps his scarf over the bottle mouth and takes a long swig.

The three of us continue to chat over dinner. I nearly fall over backwards when I clamber into the shelter with my pack strapped on.

“So, no trail name yet.” Little Mack turns to me.

“None yet.” Those on the trail for a long time often acquire a ‘trail name:’ by convention, the primary form of address on the trail.

“Do you have a real name?” Mosey breaks in.

“Well, there are two ways you can get a trail name,” Mosey replies. “Someone can give one to you, or you can give one to yourself. The problem is, you may not like the name someone gives to you. I gave myself the name Mosey because I mosey along. I’m in no rush - I’ll stop if I see a butterfly or flower.

I stir my noodles over the flame as Mosey continues.

“My mom was a drug addict. I grew up in the projects. So many times when I was a baby, I could’ve died. I didn’t talk to her for the longest time.”

“How did you forgive her?” I ask tentatively.

Mosey meets my eye. “I lost my baby.” He pauses. “I called my mom right then that day.”

Another pause. “Her name was Lucy Star.”

"People with two parents take it for granted. They complain about their parents when they don't know how lucky they are to have two to complain about." - Little Mack, section hiker

6:30 am. I see a beam of light bobbing along across the stream as I sit up in my sleeping bag: Little Mack packing up his tent. As quietly as possible, I crawl from my bag, turn on my headlamp, and head out with toothbrush in hand. Though I carefully train my light on my side of the shelter as I return, Mosey wakes when I climb in.

“I thought that was the sun.” He points to my headlamp.

He stretches lazily, still bundled in his covers, and yawns. “I was having a dream – I don’t remember most of it, but I remember realizing something: things are meant to be given, received, used, and broken. That includes the self…

“Given…received…used…and broken,” he repeats quietly, making no motion to get up.

“Remember what I said about trail names,” he reminds me as I finish packing.

Today, I plan to hike 15 miles to my first town stop in Front Royal. After a few hours, though, I must face the fact that my feet are not yet ready for the miles; I decide to take an extra day, ration out my food, and hike in tomorrow.

I reach Manassas Gap Shelter by lunch, and begin to lay out my mess kit in preparation for mealtime. As I do, an elderly Korean couple wander towards the shelter. They converse with me in broken English.

I ask, “why did you come to America?”

The man turns to his wife for a translation, then turns back to me. “American Dream.”

That afternoon, my phone has a signal for the first time since I started hiking. When I call my dad, he says, “I’m proud of you. If I had a chance to go on the trail when I was your age, I would’ve gone, too.”

That night, I stay at the Jim and Molly Denton shelter, experience a solar shower for the first time, and think about my family’s history. My grandparents and parents survived both war and famine. Their generation came to America dreaming of a better future. My generation has the chance to build a better future. What kind of future will I help build?

"Think about the beginning of your journey, and where you are now. Now is the most powerful time." - Mosey Mosey Breaker Breaker 1-9